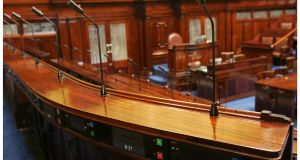 An expert review into electronic voting in the Dáil has recommended installing extra cameras in the chamber at a cost of about €50,000 to prevent TDs from voting for their colleagues.

The controversy surrounding electronic voting practices in the Dáil first emerged last year when Fianna Fáil TD Niall Collins voted six times for colleague Timmy Dooley while he was absent from the chamber during Dáil votes.

The party’s former Brexit spokeswoman, Lisa Chambers, also said that in one vote she had mistakenly sat in deputy leader Dara Calleary’s seat and voted before moving to her own seat to vote again.

In a review of the current voting system, Prof David Farrell of UCD presented five options for reform, which are: chip card readers, a two-hand voting system, biometrics, voting displays and additional cameras.

“Of the various options available to prevent Deputies intentionally, or otherwise, voting on behalf of another Deputy, the installation of additional cameras to record the act of voting would seem the best on grounds of effectiveness and cost,” he wrote.

“Installing additional cameras would enable the recording of all Deputies in their seats as they vote. The data could then be stored for a period of time to allow Dáil authorities to carry out an audit of the vote if needed. This [the cameras] would be relatively cheap to implement, although the estimates vary: SKS Communications estimates the cost of installing new CCTV cameras at between €45,000-€50,000, whereas the Oireachtas Broadcasting Unit suggests a series of options ranging in cost from less than €1,000, working off existing CCTV cameras, to somewhere between €50,000-€100,000.”

The cameras “would provide a definitive record in the event of any future challenge to the veracity of a vote”.

The review also recommended that the seat designations of each Deputy be indicated by a sticker with his or her name on it located prominently on the seat.

Another option which was explored was a change to voting displays which are currently mounted above the press gallery which overlooks the chamber.

“Currently the display maps each voting seat and a colour-coded light illuminates to show how the seat has voted (Yes, No, Abstain). There are ways in which the display could be modified, such as providing party totals, or by including the names and/or photographs of Deputies,” the review states.

However, this option would be “difficult and costly to implement” and would cost up to €123,000 per display.

The report says that the Italian lower house uses this system and it was also used in Luxembourg before being abandoned on foot of complaints from MPs.

The report says there would be “significant costs” of up to €600,000 associated with this reform.

Other possibilities for change include two-hand voting, which is used in the Indian parliament, where in order to vote a representative must press two separate buttons, the present button and one of the voting buttons, simultaneously. This would cost up to €140,000.

The possible use of chip card readers was also considered by the report.

“This system does not prevent a Deputy from giving their card to a colleague to vote on their behalf,” the review says, with this option costing up to €80,000.