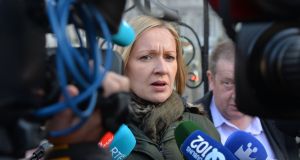 Lucinda Creighton of Renua Ireland holding a press conference outside the gates of Leinster House in response to the declaration of election. Photograph: Alan Betson / The Irish Times

Renua leader Lucinda Creighton has said “vast sums of money” are being pumped into her Dublin Bay South constituency in an effort to prevent her re-election.

Speaking at Renua’s first event since the Dáil was dissolved, Ms Creighton said the party was a “political force to be reckoned with” and was targeting 10 seats in the general election on Friday, February 26th.

Ms Creighton said hers was a small party with a limited amount of resources and Oireachtas members. TDs Billy Timmins (Wicklow), who is deputy leader of Renua, and Terence Flanagan (Dublin Bay North), are among the party’s candidates.

When Renua was launched in January 2015, Ms Creighton said she hoped the party would raise € 1 million in small donations before the general election.

On Wednesday afternoon, she said that figure had not been reached. “We’re not at € 1 million yet, that’s for sure,” she said.

“Our campaign will largely be run on adrenalin, enthusiasm and a passion for a better Ireland and I think for me that beats all the apparatus and the machinery of the established parties,” she said.

“Our target is 10 seats. We think it’s eminently achievable. We might even do better than that. We’re trying to dampen our expectations but we think that that is a very achievable figure.”

Ms Creighton said her party could play a “watchdog” role in a new Government.

“Renua Ireland has absolutely no intention of just making up numbers. We are a political force to be reckoned with and we will drive a very, very tough bargain if we’re to be part of the next government.”