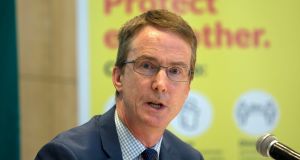 The Cabinet is to consider a major crackdown on house parties and pubs that are not complying with public health guidelines under new measures to tackle the spread of Covid-19.

Under the proposals expected to be approved by Ministers on Friday, it will be an offence to organise or attend a gathering in a private house with more than six visitors either indoors or outdoors. This measure was introduced as a guideline last week.

Gardaí will also be given the powers to close a pub immediately where they believe public health guidelines are not being followed. With the sanction of a superintendent, a garda can order the closure of a premises either orally or in written format. If the owner does not comply, they could be subject to a fine or imprisonment on conviction.

It is understood that the number of people permitted at weddings will remain at 50. The Cabinet will also agree that pubs that serve only alcohol will not be permitted to reopen on Monday.

The move comes as officials on Thursday reported “a significant number of outbreaks”. According to Dr John Cuddihy, director of the Health Protection Surveillance Centre, there are currently 392 active outbreaks of Covid-19 in the country, some 252 of which are related to social gatherings in private households. In one case an outbreak linked to a single pub-restaurant had resulted in 36 cases, he said.

“We’ve gone from what was a local problem with several big clusters to a national problem with lots of smaller clusters,” the acting chief medical officer, Dr Ronan Glynn, said.

However, it is expected that current local restrictions in place for Kildare are not going to be lifted early due to continuing high numbers of cases in the county.

The National Public Health Emergency Team (NPHET) on Thursday decided against recommending any early easing of the lockdown measures for Kildare.

Dr Glynn said the situation in the county had been “improving and stabilising” after large increases in cases linked to clusters in several food processing plants.

But “it hasn’t improved or stabilised to the extent we would need”, Dr Glynn said. In the past 14 days there had been 329 Covid-19 cases in Kildare, and while the rate of the spread of the virus was slowing, it remained the highest in the State, he said.

“We’re confident everything is going in the right direction, but if we release the measures too early, we could see a rebound in the opposite direction,” Dr Glynn said.

NPHET also decided against recommending pubs that do not serve food can reopen on Monday, as some in the industry had hoped. The group did not feel it would be “appropriate”, Dr Glynn said. The potential reopening of pubs that cannot operate as restaurants will be reconsidered in two weeks’ time.

Dr Glynn said officials were “not contemplating a national lockdown as things currently stand”, adding he hoped the spread of the virus had not reached a “tipping point”.

The HSE on Thursday ruled out restrictions aimed at protecting older and more vulnerable people as a means of avoiding a national lockdown because of the adverse impact it had seen on their health as a result of cocooning.

NPHET reported 93 new cases of coronavirus on Thursday and no new deaths.