Coronavirus: Varadkar asks for calm and signals difficulties ahead 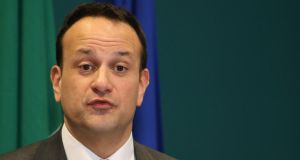 Taoiseach Leo Varadkar: We are facing “a global and national emergency, a pandemic the like of which we have never seen before”. Photograph: Nick Bradshaw

Taoiseach Leo Varadkar sought to offer reassurance and resolve in a televised address to the nation on Tuesday night on the coronavirus crisis but also to prepare the public for a huge escalation in the numbers infected, new restrictions, a lockdown for the elderly and an extension to school closures and other measures.

While Varadkar’s address appealed for calm and co-operation, he was also clearly seeking to signal that the elderly and those made particularly vulnerable to the virus by pre-existing conditions would soon be asked to stay in their homes “for several weeks” to protect themselves.

He said that arrangements would be made to ensure that food and supplies were brought to people affected to make this “cocooning” feasible.

But it is clear also that other potential restrictions – such as the total shutdown that a number of countries have implemented – could also be on the cards in the coming weeks. “More will be required in the coming weeks to reduce the spread of the virus,” he warned.

Varadkar did not, however, announce any new restrictions on commerce or on people’s movements at this point. He said the Government was “watching what’s happening around the world and will learn from the experience of other countries affected by Covid-19 before us – what works and what doesn’t”.

Varadkar is also clearly signalling the crisis will not be over any time soon, warning that “it could go on for months into the summer” and saying the emergency will last long beyond the March 29th date for schools to be reopened. By that time, he expects that there will be 15,000 cases of the virus.

Varadkar reiterated the official advice on social distancing and hand-washing, and pledged assistance to those who have lost and will lose their jobs in the coming weeks and months. There is a consistency in the Government’s approach since the crisis began that is a reassuring contrast to the British and US governments’ responses.

Overall, Varadkar’s message was a sobering one – warning plainly that very difficult times are coming, and coming quickly, but seeking to describe to the country the preparations that continue to be made to ensure that as many people as possible are protected and that our society can return to normal once the crisis passes.

The truth is, though, that Varadkar does not know how successful those efforts will be. No Irish government – indeed, no government in a modern democracy – has faced anything remotely like this before. It is, as Varadkar said, “a global and national emergency, a pandemic the like of which we have never seen before”.

His statement came after extraordinary announcements by the British government and the White House about efforts to protect their economies from the fallout from coronavirus. British chancellor of the exchequer Rishi Sunak announced a massive £330 billion commitment to support business and the economy – including grants of £25,000 to businesses affected by the crisis to help them through the coming months – while, in the US, President Donald Trump announced he would seek congressional agreement for a $850 billion dollar stimulus package which may include cash payments to citizens. The EU announced a 30-day travel ban.

All across the West, governments are imposing unheard-of restrictions on citizens’ daily lives and effectively shutting down large parts of their economies and societies to contain the spread of the virus. We have never seen anything like it.

And, as Varadkar warned, it has not really hit yet. Even if we know what is coming, it will feel very different when it does.