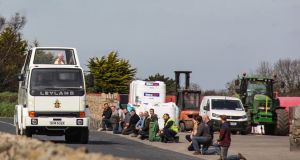 The Government will on Friday announce an extension of the Covid-19 restrictions on commercial and social life, but is expected to indicate that a partial lifting of the strict regime could take place next month if the rate of infections continues to fall.

The restrictions are to stay in place for at least the next two weeks, with several senior sources expecting that they will remain until the May bank holiday weekend.

The move is likely to be announced on Friday afternoon after a meeting of senior public health officials. Minister for Health Simon Harris is then expected to sign an extension of the Garda powers to enforce the lockdown.

While the focus remains on maintaining the restrictions of recent weeks in order to continue the suppression of the virus, senior officials have begun to work on plans for a “phased” exit from the lockdown.

However, senior sources stress that even when the easing of the restrictions comes, it will only be partial and gradual.

Priorities are expected to include reopening some retail businesses, construction and schools – possibly for only part of the week initially.

There was a heavy Garda presence on many routes on Thursday as gardaí sought to enforce restrictions. As the Easter holiday approaches, cross-Border travel will be monitored by gardaí and PSNI officers to ensure people are adhering to coronavirus restrictions.

People caught by gardaí engaging in unnecessary travel this weekend will be given at least three opportunities to comply with the law before facing arrest, according to a direction from Garda management.

Before resorting to arrest, gardaí must go through the four-step escalation process termed “engage, explain, encourage, enforce”, Garda superintendents have been advised.

Under the emergency legislation anyone travelling for non-essential reasons or exercising farther than 2km from home will be committing an offence.

Assistant secretary general at the Department of Taoiseach Liz Canavan said on Thursday that work was under way to determine what any lifting of restrictions would look like.

“I suppose at the beginning we might have all thought that would happen in one go, but we’re more clear now it’s going to happen in a much more phased way. So there’s ongoing work, and there are a number of subgroups looking at a range of issues,” she said.

“The purpose of the senior officials group and the Cabinet committee is to map our way through this, so that’s constantly being reviewed in relation to where we are now. So we published the action plan [and] we’re continuing to update that.”

However, Ministers and senior officials were at pains to stress that any relaxation of the restrictions was weeks away and entirely contingent on uncertain factors – not just further reductions in the infection rate but a significant increase in testing and tracing capacity

It was announced on Thursday evening that 28 more people had died from the coronavirus, bringing the total number of fatalities in the State to 263.

The number of confirmed cases in the State increased by 500, the highest increase in a single day to date and now stands at 6,574.

Analysis by the Health Surveillance Protection Centre (HSPC) of 6,444 cases as of Tuesday shows the median age of known cases is 48.

Although the number of known cases rose sharply on Thursday, data compiled for the Department of Health shows the rate of growth is beginning to slow. While new cases were growing at a rate of 33 per cent at the beginning of the outbreak, that has slowed to 9 per cent this week.

In addition, there has been a significant decline in the infection rate – the number of infections caused by people infected with the virus.

At the beginning of the outbreak each case was responsible for 4.5 infections; this had now been reduced to about one person, said Prof Philip Nolan, chairman of the National Public Health Emergency Team’s epidemiological modelling group.

Chief medical officer Dr Tony Holohan said he was “sensitive” to uncertainty facing Leaving Cert students regarding the State examinations, and officials “will try to bring as much certainty to that as quickly as we can”.

Dr Holohan added that travel into the country from the UK and further abroad was “very very limited” to returning Irish citizens and essential workers, such as haulage drivers working in key supply chains.

The HSE’s chief clinical officer, Dr Colm Henry, said the health service’s position on the use of face masks had not changed, and only individuals advised to wear masks should use the protective equipment.

Latest HSPC figures show that two more people between ages of 35 and 54 died earlier this week, bringing the death toll of coronavirus victims under 55 years of age to 12.

Taoiseach has confirmed schools will reopen at the end of August 18:38
Private hospitals ‘takeover’ by State will not be extended past June 18:32
Coronavirus: Further six deaths reported along with 39 new cases 18:39
Elderly woman living in squalor has capacity to make unwise decisions – court 18:26
‘The pint man is back’: Belfast pub resumes delivery service after legal challenge 17:52