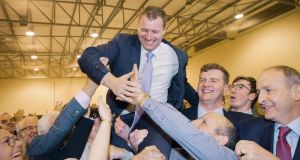 Fianna Fáil is celebrating in Cork North-Central tonight after its candidate, Cllr Pádraig O’Sullivan was elected on the 10th count to retain the seat vacated by outgoing TD Billy Kelleher.

Mr O’Sullivan took the seat without reaching the quota when he finished with 11,633 votes after picking up 2,976 transfers from Fine Gael’s Colm Burke to hold off the challenge of Sinn Féin’s Cllr Thomas Gould who finished on 8,044.

“We are delighted with the result. The pressure was on because Billy Kelleher had a great record here and we’re delighted that we managed to maintain the share of the vote he had and get it,” Cllr O’Sullivan said.

“It’s tinged with a small bit of disappointment that turnout was so low because I would have liked more people involved but given the vote share, we are confident it’s put us on a good footing for the general election next year.”

A native of Little Island living in Glanmire on the outskirts of Cork city, Mr O’Sullivan teaches Irish and History at Coláiste an Chraoibhín in Fermoy and is married to Bernie. The couple has a nine-month-old son, Páidi Óg.

Sinn Féin’s Cllr Thomas Gould put the party’s poor performance in this year’s local elections in both Cork city and Cork County Councils behind him to come in third place with 19.72 per cent of the vote with 5,041 first preferences.

Mr O’Sullivan maintained his lead throughout the various counts as independents and candidates from smaller parties were eliminated with Burke maintaining his position in second spot ahead Gould until the seventh count.

But with the elimination of Solidarity-People Before Profit’s Cllr Fiona Ryan, who polled 4.38 per cent or 1,121 first preferences, Mr Gould picked up 456 transfers to Mr Burke’s 91 to leapfrog the Fine Gael man and move into second place.

The elimination on the eighth count of the Green Party’s Cllr Oliver Moran, who polled a credible 7.36 per cent with 1,883 first preferences, saw Mr Burke close the margin to just 64 votes as he picked up 434 Green transfers to 249 for Mr Gould.

Fianna Fáil leader, Micheál Martin congratulated Mr O’Sullivan on his election and said Fianna Fáil was delighted to hold its seat in Cork North Central but he played down speculation that the win might hasten a general election.

“This doesn’t change the trajectory of when an election will happen. I am still looking at the springtime. I think Brexit needs to be sorted first so let’s not run ahead of ourselves,” said Mr Martin.

“In Britain, we are not even there yet in terms of a British general election. At the moment, if Boris heads for victory, as it looks like, I think the deal that is on the table will come through on January 31st.”

“We will have honoured our commitments then in terms of putting the needs of the Irish people and the national interest first in terms of not having political instability around the Brexit issue.”

Meanwhile, Tánaiste Simon Coveney acknowledged it was difficult to get people out to vote in a byelection when they know a general election is imminent but he said the result showed Fine Gael were on track to take a seat next time out.

“We have gone from 18 per cent to between 21 per cent and 22 per cent so we’re happy enough that.

“ I think it puts Colm Burke in a great position going into the next election in terms of his profile across the entire constituency.

Mr Coveney said while Fine Gael had increased their vote, Fianna Fáil would also be happy holding their vote as would Sinn Féin who were back to their 2016 level of support unlike Solidarity/People Before Profit.

“I think the story of Cork North-Central is the collapse of the hard Left, Solidarity/People Before Profit – Mick Barry got 16 per cent the last election, they’re at 5 per cent now and the Greens and Labour have gained some of that vote.”

Can you move house now and how will it work?