Independents/Others are the big winners, with support up by five points to 19% 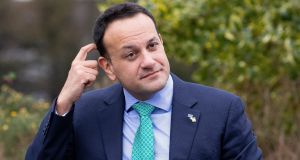 Today’s Irish Times/Ipsos MRBI poll shows support for Fine Gael has declined by three points to 30 per cent since our last poll in October 2018.

Support for Fianna Fáil is at 24 per cent, down one point. Sinn Féin has also lost ground, down three points to 21 per cent. Independents/Others are the big winners in today’s poll, with support up by five points to 19 per cent. The Labour Party has also registered an increase in support, up two points to 6 per cent.

Fieldwork for today’s Irish Times/Ipsos MRBI poll took place on Monday and Tuesday of this week among a nationally representative sample of 1,200 eligible voters. Interviewing was conducted face-to-face, in-home, across all 40 constituencies.

At 24 per cent, support for Fianna Fáil now sits at the same level as was achieved by the party in the 2016 general election. Today’s poll shows that Fine Gael’s lead over Fianna Fáil has narrowed from eight to six points, a gap that is unlikely to afford much comfort to Fine Gael. In our poll conducted directly before the 2016 election, Fine Gael recorded a five-point lead over Fine Fáil. However, on election day this lead narrowed to just two points.

Support for the Labour Party has also increased, up two points to 6 per cent. This is first time the party has reached this level of support since December 2016 and they are now just one point below the support level registered in the 2016 general election.

Today’s poll results show that Government satisfaction has declined marginally by one point to 38 per cent. This is the lowest rating recorded for the Government since October 2017 and the second consecutive decline in satisfaction levels.

Similarly, satisfaction with the Taoiseach is at its lowest level (43 per cent) since Leo Varadkar took office and has dropped by eight points since October. While satisfaction with the Taoiseach has declined across all demographic groupings, he maintains his position as the most popular party leader in the State, eight points ahead of Micheál Martin.

Satisfaction with Martin is down four points to 35 per cent, his lowest rating since February 2016. He ranks just two points ahead of Mary-Lou McDonald who records a satisfaction rating of 33 per cent. McDonald’s rating has declined by seven points since our last poll, with the largest drop recorded in her own county of Dublin, down 15 points to 29 per cent.

Brendan Howlin is the only party leader to record an increase in satisfaction, up marginally by one point to 19 per cent.

While the results of today’s poll show some movements in party support levels, there is nothing to indicate that going to the polls any time soon would result in a significant change to the current Government arrangement.