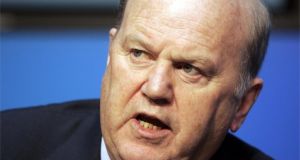 The Cabinet sat in differing stages of subsidence, as if the air was slowly escaping from their inner tubes.

Ministers were coming down from their European high, experiencing the Post-Presidency Slump.

Enda and Eamon had just flown in from Strasbourg, having made their fond farewells after six glorious months away from the drudgery of the Dáil.

The Taoiseach, all but blowing kisses at his fellow leaders before he left, proclaiming himself to be “truly, madly, deeply European”.

The Irish party left with the applause of their peers ringing in their ears.

And it was back, back to the ongoing AA meeting in Leinster House, where Anglo and abortion continued to be the main items on the political menu.

The abortion bit would come at teatime, when the keenly awaited vote on Protection of Life During Pregnancy Bill was scheduled to happen.

There was no sign of Lucinda Creighton during Leaders’ Questions, although it was assumed the Minister of State for European Affairs had travelled back on the jet with the Taoiseach and Tánaiste.

The pilots must have been worried about a sudden drop in cabin pressure with Lucinda on board, given that she is at odds with the boss over the abortion legislation.

But that’s a different battle: over on the Continent, Enda couldn’t praise her enough for her sterling work and “invaluable contribution” to the Irish presidency.

Everyone was happy and there were no reports of individual oxygen masks falling from the overhead panels as they flew home.

“I’ve just returned from briefing the European Parliament in Strasbourg,” the Taoiseach, resplendent in his green presidency tie, told the House. James Bannon, above on the backbenches, wore the other one.

They’ll be able to wash them now.

As Gerry Adams returned to the topic of the Anglo tapes, Michael Noonan was collapsing in his seat like a warm Cornetto. Leo Varadkar listed alarmingly, his chin sliding towards his knees.

The Post-Presidency Slump. And a night-time Cabinet meeting still ahead of them all after the abortion business was done.

Oh, yes. The tapes. Any more of them from the other banks, Gerry wondered? Not an unreasonable question, if a little on the innocent side from the Sinn Féin leader.

As it happens, there are, replied Enda. There are tapes available from the other banks.

“The Minister for Finance will be writing to those banks tomorrow, clearly setting out the position that those tapes be preserved in the interests of being available for a banking inquiry.”

Oh, thank God for the banks. We can trust them. Those recordings were probably preserved as soon as the bankers were found out, carefully preserved in concrete and stored for safekeeping where the fishes swim.

Tape decks? In Finance? No wonder they took the eye off the ball. Too busy mixing up sounds on their decks.

This Government moves like lightning. If Michael Noonan is only writing now to the banks to see what information they have on their tapes, Enda’s Government is sure to produce the Usain Bolt of parliamentary inquiries.

“Scoooose me, if I’m a wee bit, sort of, discommoded by the fact that all of a sudden the Minister is going to write to these banks tomorrow,” exclaimed the Sinn Féin leader.

“This is four or five years ago and last week he didn’t know that there were any tapes at all and now, very conveniently, the Minister is going to rush out of here and write a letter and send it off tomorrow.”

There was no need for Gerry to excuse himself. Almost everyone else in the chamber was feeling more than a wee bit discommoded by this sudden disclosure from Enda.

But there wasn’t too much time to dwell on it, as the number crunching resumed in advance of the abortion legislation vote.

There was no danger of the Coalition losing it, but the big interest in Leinster House centred around which Fine Gael deputies would be expelled from the party by voting against it. Four of them – Peter Mathews, Brian Walsh, Terence Flanagan and Billy Timmins – had already signalled they would defy the whip, but would there be more?

The press gallery was packed for the vote, while a number of anti-abortion campaigners gathered in the public gallery.

In the end, it was just the four – others, including Lucinda Creighton were content to keep their powder dry until amendments are discussed at committee stage.

Mathews, ever true to his convictions, stood ramrod straight when standing to indicate he wanted the Dáil to hold a vote. Flanagan, when it was time, pressed his finger so strongly on the button that we feared his seat would disintegrate.

Thirteen members of Fianna Fáil defied their leader, who had asked them to support the Bill. Just four of his TDs joined him. The dissenters included Willie O’Dea, who said some time ago in an RTÉ interview that he would be voting in favour. This was before Micheál Martin had to abandon his intention to impose the whip and give in to demands for a free vote.

Yesterday, Willie told radio listeners in Limerick that he would be voting No.

It was all rather timid. Peter did what he had to do, but he looked very sad. Lucinda walked over and gave him a consoling pat on the arm.

And when the former Government four came onto the plinth, they were cheered by the anti-abortion campaigners.

They may yet be joined by some more colleagues when the final vote is taken.