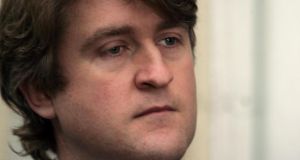 Clare Labour TD Michael McNamara said he will not take instruction from some “unelected general secretary”.

A Labour backbencher has reacted angrily to Minister for Social Protection Joan Burton’s desire to appoint a political “big beast” to the position of general secretary of the party.

Clare TD Michael McNamara, who is backing Minister of State for Primary Care Alex White in the leadership contest, described the idea as “madness” and said he would not take instruction from such a figure.

“If you want to be a big beast the first thing you need is to get a mandate. I will not be taking instruction from some unelected general secretary. I would have thought the thing that differentiated Labour from other left-wing parties was a belief in the primacy of democracy,” he said.

It is envisaged that the post would evolve to become a liaison with TDs, senators, ministers and the wider party, as well as working on the party apparatus, along the lines of the Conservative party chairman in the UK.

Mr McNamara said this should be the job of the party leader. He pointed out that the Irish Labour Party had fewer personnel that the British conservatives.

“If she is not planning as party leader to liaise with TDs and councillors than what does she plan on doing with the party leadership?”

The position of general secretary of Labour is coterminous with the party leader, which means the contract of the current office holder, Ita McAuliffe, will end upon the election of a new leader on July 4th.

The general secretary position will be advertised, and there were will be an open competition.

While the Labour Party constitution says the general secretary is appointed by the “party’s executive board following an open competitive process conducted under the authority of the party leader and with the approval of the board” the reality is the decision will be largely made by the leader of the day.