Inside Politics: The configuration of Government makes for an undramatic budget 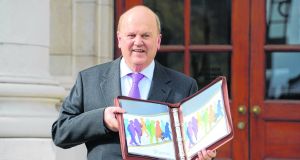 Minister for Finance Michael Noonan before the announcement of Budget 2015. Photograph: The Irish Times

The budgets of the early 1970s when Ireland was in recession were best captured by RTE’s brilliant satire Hall’s Pictorial Weekly.

Eamon Morrissey did his minister for hardship impression, and poor old minister for finance Richie Ryan was lampooned as Richie Ruin.

By the time Charlie Haughey came to power in late 1979 the boom was over, and the State was facing a crisis. He delivered an infamous address to the nation, saying: “We are living beyond our means.”

But he failed to follow up on the rhetoric and pulled his punches in the budget of spring 1980.

In the early 1980s there were three governments in 18 months. A Garrett FitzGerald coalition fell over John Bruton’s politically insensitive measure to impose VAT on children’s shoes.

Bruton argued with a tin ear that women with small feet could get away with paying no VAT - presumably because they could wear pink shoes with pictures of daisies and princesses on them.

The Independent socialist TD Jim Kemmy could not support it.

In the 1987 general election Fianna Fáil refused to recognise any “gloom and doom”. Its election slogan that health cuts hurt the old, the sick and the handicapped swayed enough supporters to back Haughey.

But once in power, Fianna Fáil cynically adopted the Fine Gael budget with Ray MacSharry bringing in swingeing cuts.

In 1998 Charlie McCreevy walked into his first major budget controversy when he introduced tax individualisation, a change that still rankles with some voters.

However, his biggest gesture was in December 2003 when his budget was dominated by a back-of-the-envelope plan to decentralise most of the civil service (over 10,000 people) out of Dublin to the provinces.

There was some merit to the idea, but the unilateral nature of it - and the fact it was not thought through - doomed it to be a costly failure.

Fianna Fáíl budgets during those years were characterised by generous tax breaks - especially for development - as well as a huge reliance on short-term transactional tax. The boom, as Bertie Ahern said, was getting boomier.

Fast forward to 2008, and the boom came to a shuddering halt. New finance minister Brian Lenihan introduced an emergency budget in October with severe cutbacks. The removal of free medical cards from over-70s prompted a ferocious ‘silver revolt’, and the government eventually buckled under the pressure.

There followed a number of budgets when the Irish Government was in remedial class and being supervised by the Troika. The October budget last year was the first one since winter 2007 in which there were no cuts.

Ironically, a year further out of the recession, the room for manoeuvre in this budget is even less. The really dramatic election and the really dramatic configuration of Government has made for an undramatic budget. Everybody has had a slice of the pie.

What should we expect?

Every year in the run-up we play the same game: Endless speculation about what will be in the budget and what will not be in. There are always leaks, but last year we had a torrent.

This year has been different. If you look through the three-page “confidence and supply” document between Fine Gael and Fianna Fáil there is a specific reference to “no surprises” in the budget.

So before Michael Noonan and Paschal Donohoe utter a syllable this afternoon, we kind of know what they are going to say.

They will have about €1.2 billion to swill around, most of which will go to spending.

On the tax side, there will be an incentive for first-time house buyers (a measure harshly criticised by Fianna Fáil for targeting the demand side rather than the supply side). There will also be some reductions in USC (half a per cent shaved off three rates); relief for the self-employed; a reduction in the rates of CGT for businesses being sold; and upward changes to thresholds for inheritance tax.

Perhaps the biggest story on the spend side will be the universal childcare package, as outlined by Fiach Kelly and Sarah Bardon in our main story.

Providing an extra €900 for most families, rising to €8,000 for the least well-off, the package is more generous than imagined.

There was last-minute wrangling last night over the start date of the €5 increase for pensioners, carers and those suffering from disabilities. However, despite threats from Fianna Fáil, there will be a compromise, with the increase kicking in for March or April.

The only ‘aul reliable’ to get a kicking will be tobacco, with the price of a packet of 20 cigarettes expected to be increased by 50 cents.

There will also be funding to recruit more gardaí, teachers and frontline health staff.

Pat Leahy has a good piece setting out how the day will pan out.

The delivery of the budget has been brought forward to 1pm, so it is a slightly earlier start than usual.

The Irishtimes. com live blog is covering budget news, analysis and reaction through the day.