Britons planning Irish retirement may have to prove ‘close connection’ 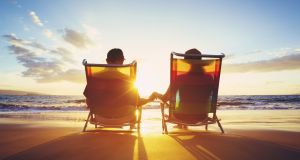 British citizens, who will likely leave the European Economic Area after the Brexit vote, may have to prove a ‘close connection’ to Ireland should they wish to retire here under new proposals from the Department of Justice. Photograph: iStock/Getty Images.

British citizens who wish to retire in the Republic could be required to show they have a “close connection” to Ireland under new proposals from the Department of Justice.

In an internal review of immigration policy for retirees, the department has suggested that applicants from outside the European Economic Area (EEA) should only be accepted if they can provide an affidavit proving they have close links to Ireland through ancestry, involvement in Irish community activities and travel to the country.

“Claimed ancestry must be accompanied by genealogical evidence. The closer the connection with Ireland the more weight it will carry in any assessment,” the review states.

The United Kingdom’s status after it leaves the European Union remains unclear, but its departure from the union could require it also to leave the EEA, a single market that includes all EU members as well as Norway, Iceland and Liechtenstein.

Some British commentators have suggested the UK should seek to remain in the EEA after Brexit, but that could be difficult for the British government, as current non-EU members of the EEA must pay into the EU budget and accept free movement of labour while having no say over the rules of the club.

Announcing a public consultation on immigration policy for non-EEA retirees, the department proposed to reduce the net annual income requirement for applicants from €50,000 per individual to €40,000. It also recommended introducing mandatory pre-clearance for applicants rather than allowing applications from within the country, as is currently the case.

About 100 retirees from outside the EEA applied to come and live in Ireland last year. About 70 per cent of those who have availed of this immigration route in the past have been US nationals, according to the department.

“The arguments in favour of offering retirement options in the Irish immigration system are social and cultural rather than financial,” the department stated in a briefing document published on Tuesday.

“There is, in particular, a value in offering avenues to the Irish diaspora to retire to Ireland and this, of course, includes the diaspora in the United States. However, outside of the diaspora, or people with a particularly strong alternative connection with Ireland, a retirement pathway to Ireland cannot really be justified.”

The review, carried out by the Irish Naturalisation and Immigration Service, a division of the Department of Justice, argues that the current “one size fits all” should be changed to take account of applicants’ age and health. It recommends that applicants should have to be certified by their doctor as being in good health for their age, and that the age range for retirees coming to Ireland should be between 60 and 75.

Visa regimes for non-European retirees differ across the EU. The UK allows non-EEA citizens who can demonstrate a close connection to the UK and an annual disposable income of at least £25,000 to apply for a retirement visa.