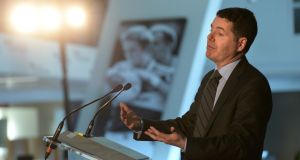 Border checks might still be required to maintain regulatory standards even if the UK and the EU reach a Brexit agreement for Ireland on customs and tariffs, Minister for Agriculture Michael Creed has said.

The Minister was speaking at a conference on Brexit in Dublin organised by Minister for Business Heather Humphreys to discuss the Copenhagen Economics report that has estimated that a “hard Brexit” could dampen Irish economic growth by 7 per cent, starving the economy of €18 billion by 2030.

Mr Creed was stressing the importance of “regulatory alignment” – maintaining common rules and procedures north and south of the Border – in the final agreement covering the UK’s withdrawal from the EU in March 2019 given that Brexit would hurt the Irish agri-food industry most of all.

The Minister said that even concluding a customs agreement without a deal that “nails down the issue of regulatory alignment”, the Government would need border checks to maintain sanitary and phytosanitary standards (SPS), a key part of any trade deal that permits the importing of products without delays.

“Apart from wanting the closest possible alignment to the status quo, we are equally anxious that the UK’s capacity to do trade deals with other countries would be somewhat constrained in the sense that they would have to stick by the standards that currently apply in the European Union, ” said Mr Creed.

The Minister, speaking to reporters afterwards, warned about the risk of creating “a backdoor” through Northern Ireland allowing products into the EU that do not meet regulations covering Irish producers.

Martin Thelle, managing director of Copenhagen Economics, said “the biggest area of economic risk to Ireland is the risk of future regulatory divergence” with cattle farmers, food processors and the dairy industry taking the brunt of a hard Brexit, potentially losing about a fifth of their business.

Ms Humphreys, who commissioned the Copenhagen report, and Minister for Finance Paschal Donohoe both said that the December backstop guaranteeing regulatory alignment and an open border would be part of the final withdrawal agreement.

The Copenhagen report estimated that by 2020 a “soft Brexit” where existing EU-UK trading arrangements continue for a transition period the Irish economy would shrink by 0.5 per cent, while a “hard Brexit” with higher World Trade Organization tariffs would have a 2.1 per cent hit on Irish GDP.

By 2030, the report estimated that the economic hit would amount to 2.8 per cent of GDP if the UK agreed a Norway-type model where they would have a “pay-to-play-with-no-say” arrangement with the EU with London agreeing to pay to participate in the EU single market but having no influence on it is run.

A customs union or EU-UK free trade agreement would curb economic growth by 4.3 per cent.

Mr Thelle told The Irish Times that a bespoke EU-UK agreement was the most likely scenario. Brexit would be most keenly felt in rural areas, he said, but could not provide a breakdown on the regional economic effect.

During a question-and-answer session, Sean O’Driscoll, president of electrical appliance maker Glen Dimplex, said Brexit could have a positive outcome for Dublin but in other areas the impact could be significantly worse than the worst-case scenario painted by Copenhagen.

“That figure of minus 7 in the extreme case would be minus 12 or minus 14 in rural Ireland,” he said afterwards. He suggested the Government commission a more in-depth report on the impact on the regions.

Under a worst-case scenario, Mr Thelle suggested that the impact of 20,000 job losses, including 12,400 agri-food jobs, would be lessened by shifting employment to service sectors such as financial services.

“I am not going to turn into a financial whizz kid in the morning,” said Lorcan McCabe from Bailieborough, Co Cavan.

“I am a dairy farmer. We need to keep the whole social structure of rural Ireland.”

Business owner Micheal Quinn, whose Co Galway company makes refrigerated trucks and exports 80 per cent of his product to the UK, told the conference during the Q&A session that the Welsh trade board had encouraged him to relocate his business to the UK because so much of his business was located there.