Brexit, E3 visas and NI on the agenda for Varadkar-Trump meeting 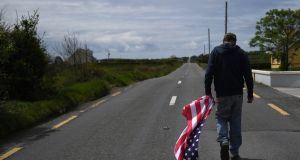 Tommy Haugh carries a US flag to festoon the streets of Doonbeg village ahead of a visit by US president Donald Trump. Photograph: Clodagh Kilcoyne/Reuters

Taoiseach Leo Varadkar is due to discuss Brexit, Irish access to US working visas, and the political impasse in Northern Ireland when he meets US president Donald Trump on Wednesday.

Mr Trump is due to arrive at Shannon Airport on Wednesday afternoon, where he is expected to hold a bilateral meeting with the Taoiseach.

Clare TD Pat Breen – who is Minister of State for Trade – and Rose Hynes, chairman of Shannon Group, are expected to be among the welcome party for the US president as he arrives at Shannon.

A spokesman for Mr Varadkar said they would hold talks about bilateral relations, E3 visas, Northern Ireland and Brexit.

The general issue of the undocumented Irish may also feature in their conversation.

About 10,500 E3 visas are available to Australian citizens each year, but only about half of the visas are taken up. Under legislation which was drafted by the US Department of Homeland Security, Irish citizens would be eligible to apply for any visas not used in the allocation. This could equate to about 4,000-5,000 visas per year.

While the only scheduled official engagement between the Taoiseach and Mr Trump is on Wednesday, Irish officials are expected to meet the president on Thursday for dinner at his golf club in Doonbeg, and again on Friday before his departure for Washington.

It is currently envisaged that the Taoiseach will not be in attendance on Thursday night in Doonbeg, though officials have left open the possibility that this could change.

Senior figures have been invited by the US delegation to Mr Trump’s golf club, including the Government’s special envoy to the US, John Deasy, and Ireland’s ambassador to the United States, Dan Mulhall.

They will also be in attendance at Wednesday’s bilateral meeting at Shannon airport.

Mr Trump is currently scheduled to leave Shannon Airport at approximately 2.30pm on Friday, though this is subject to change.

Mr Trump is expected to play golf on Friday with Joe Russell, the managing director of Trump’s Doonbeg resort, club professional Brian Shaw and director of membership Brendan Murphy, before flying back to the US.

Mick Mulvaney, Mr Trump’s acting chief of staff at the White House, and Mr Mulhall are likely to play in another grouping after the president’s.

About 1,000 gardaí have been put on standby for the visit, with multiple road closures and traffic diversions in place.

The Garda has advised parents and students to allow extra time to get to their State exams over the coming days.

“An Garda Síochána is aware that the State examinations commence during this period. An Garda Síochána locally has engaged with second level schools in these areas to give them advance notification. Parents and students, particularly in Doonbeg and Shannon, are advised to give additional travel time to ensure that they can attend exam centres without difficulty.”

In general, the public are advised to leave extra time for their journeys and to expect some localised delays.

Gardaí say that the public can expect temporary rolling road closures, to facilitate security and VIP escorts, in the area.

Access to Doonbeg village is not restricted. Trump International Golf Links and Hotel, however, is closed to the public from Tuesday.

Normal operations will continue at Shannon Airport, although additional security checks and Garda presence will be ongoing around the airport.

Gardaí said they will also engage with a number of protest groups over the duration of the visit. It is anticipated that some protest activity will take place at the entrance to the airport.