In profile: The six candidates running for the presidency

Michael D Higgins will be a hard act to follow, but the pretenders have impressive CVs 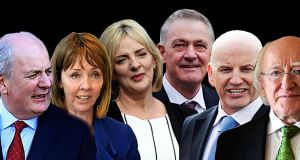 MICHAEL D HIGGINS
Age: 77
Position: President of Ireland since 2011
Party: Independent
Public life: Formerly a Labour Party TD and Senator. Minister for Arts, Heritage and Gaeltacht 1992 to 1997
Slogan: A president for us all
Platform: When asked why he is standing again, President Higgins has argued that the challenges for the next seven years are different. In particular, he has mentioned climate change, Brexit and housing in interviews.

He has four broad themes set out in his manifesto. The first is equality and inclusion, which includes diversity and marginal people. The second is sustainable communities, which takes in climate change, the environment, creativity, and localism. The third is one of his strong cards, his handling of the centenary celebrations, especially 1916. He emphasises his status, and argues he is the best person to be president for the commemoration of the first Dáil in 1919 and placing it in the context of a changed society. His last theme is his role as a representative of Ireland abroad, saying he will make Ireland a champion for human rights, peace and sustainable development. This will include, presumably, Brexit, and his contentious (and as yet untested) critique of the gap between the EU institutions and the “European street”.

Controversies: The major one so far has been an unaudited €317,000 annual allowance. It is spent on State dinners, garden parties and other events at the Áras. Under persistent questioning more details have emerged, such as the use of the Government jet by Higgins for a 165km trip from Dublin to Belfast during a radio debate. PSNI have contradicted Higgins' claims that he needed the Learjet for security reasons. The President says every cent of allowance is accounted for.

He has also been criticised for reneging on his commitment to serve only one term, and his very full schedule of high-profile “presidential” events, which his opponents say give him an unfair advantage.

Funding: The President will get support from Labour, Fine Gael and, perhaps, Fianna Fáil. His supporters have started a funding campaign seeking €50,000 initially. He will also use his own resources.

PETER CASEY
Age: 60
Position: Businessman, former Dragons’ Den panellist
Party: Independent
Public life: None. Failed attempt for the Seanad in 2016
Slogan: Small country, big nation
Platform: He has built his platform on three pillars. His first is to unite the 40 million Irish diaspora in a meaningful way, making it an economic powerhouse. He claims the Irish abroad punch below their weight. His second is an Irish birthright programme to bring teenagers with Irish heritage to the country for a month where they could experience Dublin, Belfast and the Gaeltacht. His third is to reduce the costs of the presidency. He says he will forego his salary and give it to county councils to spend on local charities.

Controversies: Has been more direct in his criticism of the President than other candidates. Casey said he did not accept that Travellers were a distinct ethnic group in Ireland, which caused controversy with Traveller groups. When asked to clarify his comments, he said "there is far too much political correctness . . . I say what I think and think what I say". He has said that Ireland is becoming a "welfare-dependent state".

Was criticised for a tweet in which he drove a golf ball into the Atlantic, and then claimed to have retrieved it. He made a claim, subsequently withdrawn, that an incident involving an intruder in the Áras was a stunt. He has said one of the consequences of Brexit might be an independent Northern Ireland. He also questions Irish neutrality and wants closer alignment to Nato.

Funding: Casey says he will fund his own campaign, which he estimates will cost €100,000.

Age: 51
Position: MEP for Ireland South since 2014. Formerly TV producer.
Party: Sinn Féin
Public life: MEP. Previously Irish language officer for Sinn Féin.
Slogan: A new president for a new Ireland
Platform: Ní Riada is the youngest of the candidates, and is a daughter of the late composer Seán Ó Riada. Both her parents died when she was a child, and her first husband died when she was 29. She has focused her messages on carers, recognition of fair wages, and a drive to bring home Irish people who were forced to emigrate during the recession.

She argues her party’s position of extending voting rights to citizens in the North and those living abroad, and wants to establish a “citizens’ conversation” on Irish unity. Mental health is also a big theme, as are community and equality.

Controversies: The Sinn Féin candidate has been questioned about her criticism of the HPV vaccine several years ago. She now says she supports it but refuses to disclose if her daughters received it, citing family privacy. She also relies on the Sinn Féin line that Gerry Adams was never a member of the IRA and has also refused to describe the IRA’s worst atrocities as acts of terrorism. “It was a terrible time of conflict. But there is no conflict without a reason,” she told HotPress in an interview. Ní Riada admitted on a presidential debate on RTÉ that she does not live on the average industrial wage, as she had previously claimed.

Funding: Her campaign is funded by Sinn Féin. She is one of only two candidates who will have posters placed around the country.

Age: 58
Position: Businessman. Dragons’ Den panellist.
Party: Non-party
Public life: None
Slogan: Ambitious for Ireland
Platform: He wants youth corps that will go to developing countries. He will also launch a campaign against childhood obesity. He will encourage diversity and stamp out cyberbullying. Duffy has put huge emphasis on his experience in business, and has argued that he would be the best at representing Ireland abroad as new economic challenges posed by Brexit and other global disruptions hit. He has not ruled out a second term, saying he would make a public decision six years into his term, if elected.

Controversies: His past work as a consultant for Denis O’Brien has been the subject of persistent questioning. He says he did a total of about 40 hours of work for the businessman during 20 years, but won’t state the nature of the advice he gave. He has also had to deny he is a proxy Fine Gael candidate – he chaired the party’s leadership debates between Leo Varadkar and Simon Coveney. He has also been asked about the lack of a public service record and funding. He initially said he would take a loan of €700,000 but has now said he will fund the campaign from his own resources.

Age: 56
Position: Businessman. Former Dragons’ Den panellist.
Party: Non-party
Public life: Presidential candidate in 2011
Slogan: Shaping our future together
Platform: It’s what he calls a values-based campaign, and very much an economic message based on communities and small business. He wants to encourage whole swathes of Ireland which he says have not seen the recovery to recover through finding their own community and business leaders. Like other candidates he says he will focus a lot on divisions and disabilities. He says he also wants to continue the work of Mary and Martin McAleese on the peace process by building up unity within communities North and South. He is convinced that Ireland will be united within his lifetime.

Controversies: There is what many see the unfinished business of the bitter 2011 campaign, especially Tweetgate (when a fake tweet was read out during an RTÉ presidential election debate which Gallagher alleged contributed to his loss). Some see his participation as in someway settling a score. He denies this. Gallagher is still asked if he is a proxy Fianna Fáil candidate (which he denies). He is also asked about his low profile in the seven years since the last campaign. He is far more open these days about his Fianna Fáil connections and his role in fundraising for the party.

Funding: Has not disclosed spending but it will come from his own resources. Has said it will be a “frugal” campaign, staffed by volunteers, without any posters.

Age: 60
Position: Senator. Founder of charities Pieta House and Darkness into Light
Party: Non-party
Public life: Senator (Taoiseach’s nominee) since 2016.
Slogan: Better Together
Platform: Unsurprisingly mental and physical health form core parts of her message. She wants to hold a mental health summit within six months of becoming president. She also wants to hold a National Assembly of Well-Being and an annual day of wellness. She has plans to address the growing rate of obesity amongst the young, and also to “change the language” around elderly people. She has also said she would extend the Gaisce award to all age groups and stamp out cyber-bullying. She would also like to “give a voice to young people on the Council of State”.

Controversies: The main controversy she has been embroiled in has surrounded funding. She does not have the resources of other candidates, and had to rely on loans. One of €120,000 came from a Los Angeles businessman Des Walsh. He is a former boyfriend from 40 years ago, but the large vitamin supplements company he headed was also investigated for pyramid selling. Her sister and niece were prominent in the No campaigns in the referendum on the Eighth Amendment and she also voted No. She said she would have no difficulty signing the new abortion regime into law, and that two of her daughters voted Yes.