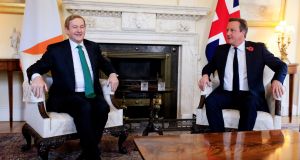 Beyond the bonhomie, Taoiseach Enda Kenny and British prime minister David Cameron hope to leverage their close relationship to their mutual advantage as Britain seeks to renegotiate its relationship with the European Union. Photograph: Jonathan Brady/PA Wire

As they sat down amid the sumptuous elegance of Downing Street’s White Room on Monday, Taoiseach Enda Kenny and British prime minister David Cameron were eager to trumpet the warmth and intimacy of the relationship between their two countries.

“I think the British-Irish relationship has gone to new heights under our premierships,” the prime minister said, adding that it was always a pleasure to have the Taoiseach in Downing Street.

Kenny joked about the fact Cameron had spoken before him that morning at the Confederation of British Industry (CBI) conference, describing the prime minister as his warm-up act.

Beyond the bonhomie, the two leaders hope to leverage their close relationship to their mutual advantage as Britain seeks to renegotiate its relationship with the European Union.

In his speech to the CBI, the Taoiseach made no bones about the stakes for Ireland, describing the prospect of Britain leaving the EU as “a major strategic risk” for the State.

A British exit would not only carry an economic cost for Ireland, as outlined by the ESRI last week, but also had the potential to undermine the constitutional settlement in the North, the Taoiseach warned.

So Kenny promised to offer as much support as possible to Cameron during the negotiations, which begin properly on Tuesday, when the prime minister is due to set out his demands in a letter to European Council President Donald Tusk.

The broad thrust of the British wish list is already well known, and parts of it, such as a demand for deepening the single market and cutting unnecessary red tape, are uncontroversial.

It is the other demands, particularly a curb on welfare payments to migrants from other EU member states and safeguards to ensure that the euro-zone countries cannot ignore the interests of non-euro countries, that will be more difficult.

Tánaiste Joan Burton warned on Monday that “fairness must be front and centre” in any new EU deal on welfare, adding that the Government would not support any proposals which would fundamentally undermine the principle of free movement within the EU.

Ibec chief executive Danny McCoy endorsed the Taoiseach’s support for Britain’s economic reform agenda in Europe, but warned that “while collaborating with the UK on this common goal, it is also imperative that the UK does not steal a march to Ireland’s disadvantage”.

The Taoiseach said that, despite the high stakes for Ireland, Britain could not depend on Irish support for all its demands.

And twice on Monday, at the CBI and again after his meeting in Downing Street, the Taoiseach referred to the fact Irish voters backed the EU’s Fiscal Stability Treaty in the depths of the recession.

The message was unmistakable, and it echoed his declaration to the CBI that Ireland’s commitment to the EU is “clear and unqualified”.

It was that, regardless of Britain’s decision, Ireland’s destiny lies at the heart of Europe, as a member of both the European Union and the euro zone.

A survey of 350 Irish businesses released on Monday by accountants BDO found two out of three were scarcely concerned at all by the prospect of Britain leaving the EU.

Perhaps the Taoiseach should consider sending a similar message to Irish businesses as he did to their counterparts in London on Monday.

“The Irish Government’s strong view, backed up by independent economic research published last week, is that a Brexit is not in Ireland’s economic interest.

“The research showed adverse impacts across a range of headings including trade, energy and the labour market. It also debunked the myth that there would be some FDI bonanza for Ireland if Britain left the union,” he said.