Government and EU to engage with UK on backstop proposals 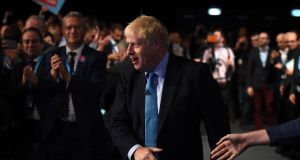 Former taoiseach Bertie Ahern has warned that British prime minister Boris Johnson’s proposals to replace the backstop should not be dismissed.

They should be analysed carefully as to reject them outright could provide UK politicians with an opportunity to go into an election saying “they rejected our proposals.” he told Newstalk Breakfast.

“I don’t like people north and south coming out saying it is a load of rubbish. He [Boris Johnson] did not say this is it, ‘hump off’. It is incumbent on the Irish Government and the EU to clarify issues.” he told Newstalk Breakfast.

“If I was Leo [Varadkar]I would set out clearly the Irish position, it should be restated that the Customs Union was not the issue in the Referendum in 2016, it only came into the equation after Theresa May’s Lancaster House speech with the red line.

“ If there was a change in position on the Customs Union that would be a game changer.”

He said he was “not that enthusiastic” about Boris Johnson’s position and he was concerned that a return to border checks would make life more difficult.

The Government and the European Commission have said they will engage with the British government over the coming days on proposals unveiled by Mr Johnson to replace the backstop.

However, there is little expectation in either Brussels or Dublin that a deal on the basis of new proposals is remotely possible in the weeks before the Brexit date of October 31st.

While the commission and Government here did not want to dismiss the British initiative, highly placed sources agreed it is unrealistic to expect that a new agreement could be struck on the basis of the British submission. Most are of the view that an extension to the October 31st date is likely.

Mr Johnson spoke to Taoiseach Leo Varadkar and European Commission president Jean-Claude Juncker by phone on Wednesday and both men later said they would study the British proposals and continue to talk to London about them. He also spoke to German chancellor Angela Merkel.

Mr Juncker welcomed the British plan as a measure of Mr Johnson’s “determination to advance the talks ahead of the October European Council [summit] and make progress towards a deal”. EU chief negotiator Michel Barnier told the commission the proposals would be carefully studied and there is no question of rejecting them out of hand. But Brussels sources made clear the British plan would not be the basis for a new deal.

Dublin is equally keen not to reject the proposals outright. And Government sources said they are a basis for discussions, though not, in their present form, for an agreement.

After a phone conversation between Mr Varadkar and Mr Johnson on Wednesday night, sources said the Taoiseach had told the British prime minister the proposals “do not fully meet the agreed objectives of the backstop”.

However, Mr Varadkar undertook to “study them in further detail, and consult with the EU institutions, including the task force and our EU partners”.

Mr Johnson’s proposals, sent to Brussels on Wednesday afternoon, would mean Northern Ireland leaving the EU customs union – the bloc’s tariff-free trading area – but remaining aligned with the EU’s single market rules, the bloc’s uniform set of standards, for all goods including manufactured as well as agricultural and food products.

This would mean some checks on products and goods moving between Northern Ireland and the EU, but also customs checks on goods moving across the Border. London says the checks can be mostly conducted electronically, but some checks will still be required – a red line for Dublin.

Earlier in the day, Mr Varadkar repeated his pledge not to accept any deal that entailed checks on goods moving between North and South. He also disputed the assertion by Mr Johnson that such checks would be a “technical” matter.

“I think it’s much more than a technical issue,” he said. “It’s deeply political, it’s legal and the technical aspects are only a small part of it.”

In his closing speech to the Conservative party conference in Manchester, Mr Johnson described his proposal as a compromise for both sides that respects the Belfast Agreement. And he said Britain would leave with no deal if the EU rejects them.