Both sides of abortion debate air views in Dublin demonstrations 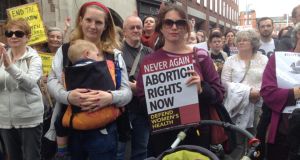 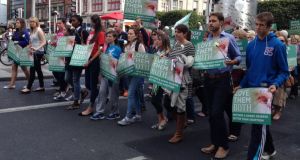 The protest, organised by several pro-choice groups including Action for Choice and Choice Ireland, began at the Spire on O’Connell Street at 2pm.

Protesters marched to Leinster House to call for a reconvening of the Dáil to address the country’s abortion laws.

The legislation has been in the spotlight since the case of a young woman, who said she was suicidal after becoming pregnant through rape, had a Caesarean section at 25 weeks pregnancy after being refused a termination under the Protection of Life During Pregnancy Act.

Socialist TD Ruth Coppinger said of the Act: “There shouldn’t be any tribunals, any inquisitions or any panels to decide what women need and want. That should be the choice of the woman herself.”

She called the silence of the Labour Party, including Tánaiste Joan Burton, “absolutely shameful”.

Dr Ross Kelly of Doctors for Choice said the group called for two things. Firstly an independent – non HSE – inquiry into the clinical decisions that took place in the case, and secondly the repeal of the 8th Amendment and decriminalisation of abortion services in Ireland.

Pro-life groups were equally critical of Ireland’s abortion legislation during a vigil at the Spire which began at 4pm. A similar vigil took place outside Leinster House on Friday evening.

Organisers said the event was being staged to “challenge the undignified clamour from pro-choice advocates for more abortion as a premature baby struggles for life” and to highlight the importance of the equal care that is due to the baby at the centre of the controversy, who was delivered prematurely.

Gardaí estimated that more people turned out for the vigil than had attended the pro-choice demonstration earlier in the day.

Protesters gathered in the median on O’Connell Street and queued to sign a get well message for the baby, whom they referred to as “baby Hope”.

The crowd chanted “we love you, baby Hope” and held signs that read “love them both” as they marched to the Irish Family Planning Association offices to lay down carnations.

Dr Eoghan de Faoite of Youth Defence said the baby was “once a perfectly healthy baby boy living in the womb of a physically healthy mother” and “will now face a lifetime of medical complications…all because of the cruel, barbaric and fundamentally flawed abortion act”.

Dr de Faoite said the baby was not the only victim of the law.

He said the young woman was not properly treated, and medical personnel should have addressed her mental health status. Counselling, psychotherapy and psychotropic medication “if she needed it” was the “correct treatment for suicidality, not abortion”.