Book on John Hume does not present him as saint, says son 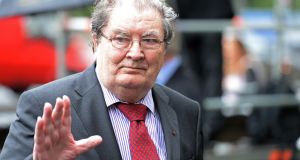 John Hume jnr, son of the former SDLP leader, has said his father is suffering from “advanced stage dementia” but that, unlike the past when it seemed “there was always something troubling him, he is now very happy”.

He was speaking in Dublin on Tuesday night at the launch of John Hume Irish Peacemaker, a book edited by former SDLP colleagues Seán Farren and Denis Haughey.

Mr Hume himself was unable to be there for the launch, nor was his wife Pat, at the Institute of International and European Affairs in Dublin. John jnr said: “My father could not have got half the way if it wasn’t for my mother.”

The book, a collection of essays by prominent people who had dealings with John Hume, with foreword by Bill Clinton, does not present his father as a saint, John jnr said, but with his “warts there for the world to see”.

Denis Haughey paid tribute to “that unusally talented generation of servants of this nation within the Department of Foreign Affairs” during the period.

“I think this country may not now yet realise the enormity of the debt owed those great men and women,” he said.

The book was launched by Miriam O’Callaghan, who championed John Hume to win the Ireland’s Greatest public poll in 2010 on RTÉ One television.