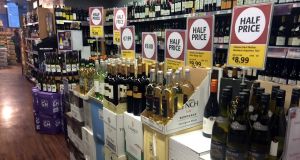 Medical experts say three people die every day as a result of alcohol use. Photograph: The Irish Times

Legislation to segregate alcohol from other products in supermarkets and small shops may be reintroduced in the Seanad in early July.

The political brainchild of then minister for health Leo Varadkar when it was introduced in the Seanad, the Public Health (Alcohol) Bill passed second stage under his stewardship in December 2015, before the general election.

Reintroduced under the current Government it was withdrawn in October last year after a filibuster, mainly by Fine Gael Senators during committee stage, as they went to war on behalf of the business community in a row over blocking alcohol from sight in a manner similar to cigarettes.

Plans were made to bring it back to the Seanad again earlier this year but stalled. Now, however, Minister of State Marcella Corcoran Kennedy hopes to reintroduce the legislation in July with the aim of it being passed before the Dáil recess, if she is remains in position following following Mr Varadkar’s Cabinet deliberations.

Departmental staff working on the legislation have since been transferred to other work or departments, but a senior official who worked on the Bill is expected to help pilot the remaining stages through the Seanad.

Assuming Mr Varadkar is elected Taoiseach, following his elevation to Fine Gael leader, the Bill could be his first legislative victory if as he says, he has “unfinished business” in health. However, it would mean bringing unruly Fine Gael Senators into line.

Oireachtas members and Ministers were lobbied by the medical profession and the drinks industry. And retailers in turn made representations to politicians.

The Bill was stalled and the alcohol sector scored a victory in the long-running battle with doctors and public health officials over the public’s pockets and livers.

Medical experts say three people die every day as a result of alcohol use. There are an estimated 1.34 million harmful drinkers who exceed safe limits in Ireland and 1,500 hospital beds are occupied every night by patients with alcohol-related illnesses, which account for 10 per cent of healthcare costs.

Alcohol consumption costs the economy an estimated€1.5 billion a year, according to the Health Research Board. And absenteeism due to alcohol costs about €41 million annually.

Speaking last week at the launch of Askaboutalcohol.ie, a State website, Ms Corcoran Kennedy said “there is a generation of children growing up now thinking that alcohol is the same product as any other product. It’s actually not. It’s a toxin, it’s a carcinogen, it’s a psychoactive drug, it causes cancer like tobacco does.”

Ireland could eliminate Covid-19 ‘within months’ with tighter restrictions