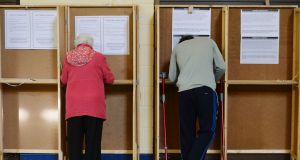 It will be 2025 at the earliest before overseas citizens will be eligible to vote. Photograph: Alan Betson

Ireland’s diaspora has no chance of voting in next year’s presidential election, Minister for Local Government Simon Coveney has confirmed.

Work is however starting on improving the voter registration process, he said.

Taoiseach Enda Kenny pledged during his St Patrick’s week visit to the US that a referendum would be held on whether or not to allow non-resident citizens, including those in Northern Ireland, to vote in presidential elections.

Mr Coveney said that even if a referendum was held immediately and passed, “it would not be feasible to have comprehensive arrangements in place for an extension of the franchise to have effect” by the time of the next election in November 2018.

Modernisation of the voter registration process and the introduction of arrangements to allow eligible non-resident citizens vote would be required. He told Fianna Fáil TD Michael Moynihan that “the Government has agreed that my department should commence work to effect improvements in the process for the registration of voters”.

It will be 2025 at the earliest before overseas citizens will be eligible to vote.

The Cork North-West TD had asked in a parliamentary question for an update on the implementation of the diaspora voting in future presidential elections.

Mr Coveney pointed to the options paper he published in March, days after the Taoiseach’s referendum pledge announcement.

The 78-page document highlighted a potential cost of up to €21 million to include the diaspora, which has been estimated at 3.6 million people including 1.87 million in Northern Ireland and 1.8 million outside the island of Ireland.

In 2013 the Constitutional Convention recommended that the franchise be extended to non-resident citizens to bring Ireland in line with 125 countries that allow overseas citizens the right to vote.

Concerns had been expressed by politicians that the diaspora would outnumber the 3.2 million eligible voters in the State. However the options paper pointed to international comparisons including the 2015 UK general election in which 263,902 voted from the eligible five million overseas population.

Of the two million overseas Canadians eligible to vote in its 2015 election, just 15,603 registered to vote and 11,000 of them actually exercised their franchise.