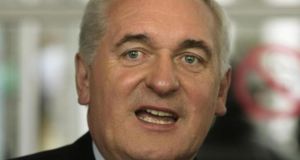 Bertie Ahern spoke said of the idea of gender quotas: “I don’t agree with it, I think it is zany.” Photograph: Dara Mac Dónaill/The Irish Times

Former Taoiseach Bertie Ahern has criticised the gender quotas and said he is firmly against their introduction.

Mr Ahern was speaking on Newstalk radio after it emerged two key Dublin constituencies were directed to select a single female candidate.

Members of the party in Dublin South Central and Dublin Central received a letter from the national conventions committee stating it had decided that “one candidate be selected at the convention and that candidate be a woman”.

Mr Ahern said the system will now block two candidates who have worked in local politics for years from contesting an election.

The decisions will pave the way for Catherine Ardagh and Mary Fitzpatrick to be selected as the single candidates in both constituencies.

Mr Ahern, who was a former Dublin Central TD, said every news programme or newspaper would be dominated if an order had been issued for a male to be selected.

He told Newstalk: “I think it’s mad. I think the idea that the person who works their way through the system, works their way through their branch, gets themselves popular with the public, then comes to the convention of the party and (the party is) saying ‘yes you have done a very good job in the last ten years, breaking your neck in your community ... but you happen to be the wrong gender, so go away’.”

The gender quotas stipulate that 30% of candidates a party puts forward have to be female or they lose funding.