Opinion: Thirteen questions have to be answered 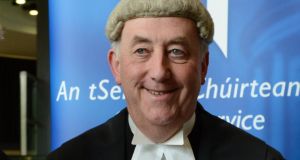 A tribunal of inquiry, chaired by, for instance, Peter Kelly (above), augmented by a banking expert and Kathleen Lynch, a sociologist at UCD, would have the capacity, legal authority and expertise to do a thorough job. Photograph: Cyril Byrne

The Oireachtas inquiry into banking is shaping up already to be yet another fiasco.

Enda Kenny has done his bit to ensure this by his remarks at the launch of the inquiry that the public needs to know the scale of recklessness of the previous Fianna Fáil-led government via light-touch regulation. That and a host of other excuses will prompt trips from Leinster House to the Four Courts, each trip costing hundreds of thousands of euros and months of delay.

Even if the inquiry survives in to 2016, it will have gone nowhere close to completing the investigation that needs to be conducted. A general election will scuttle all that has been done up to then and either the project will be abandoned once a new Dáil convenes or the inquiry will start all over again.

Oireachtas committees simply do not have the legal authority, organisational capacity or expertise to undertake this.

The last time an Oireachtas inquiry undertook a major investigation was into the Garda killing of John Carty in Abbeylara on April 20th, 2000. It made a terrible mess of it before the Supreme Court called a halt to it and to all such inquiries.

The Oireachtas failed to give a proper instruction to the joint Oireachtas committee to undertake an investigation into a Garda report on the killing; the joint committee made an order establishing a sub-committee and directed it to undertake an investigation. But a few weeks later it amended its order and that second order went missing. It then applied to the Committee of Procedure and Privileges to get authority to exercise legislative provisions requiring the attendance of witnesses, but in doing so it mis-stated its terms of reference and did not accompany its application with the revised terms of reference since it couldn’t find them. Before it got authorisation to compel witnesses and documents it issued directions to potential witnesses to attend its hearings without the power to compel such attendance. It decided on a procedure that was in clear conflict with legal requirements, as laid down by the Supreme Court in 1971. And these facts didn’t emerge until three days into a judicial review hearing in the High Court.

A tribunal of inquiry, chaired by, for instance, Peter Kelly, the senior judge now on the commercial division of the High Court, augmented by a banking expert and Kathleen Lynch, a sociologist at UCD, would have the capacity, legal authority and expertise to do a thorough job. Lynch would bring a vigorous alternative perspective. It would cost a fortune, but no more than an Oireachtas committee inquiry, for the same entitlement to legal representation and cross-examine witnesses would apply in both cases and that is where most of the costs arise.

Kenny is right to identify this as the key question but he himself was no opponent of this light touch regulation when it was introduced via the Irish Financial Services Regulatory Authority in 2003.

The following issues and questions need to be addressed:
How did the Department of Finance, Central Bank, Financial Regulator, Economic and Social Reseach Institute, European Commission, European Central Bank, International Monetary Fund and Organisation for Economic Co-operation and Development fail to predict the onset of the financial crisis here and internationally;

The processes by which the financial institutions individually got into the crisis and how they responded when it broke;

The role of the ECB in the lead-up to the crisis and its culpability in assisting the financial crisis by its cheap money policy;

What led up to the bank guarantee and how did it came about? And what other options were considered or not considered before and on the night of September 29th/30th, 2008;

The role of the ECB in insisting that no bank fail;

The collapse of the banking system following the bank guarantee;

The role of the ECB in insisting that Ireland pay unsecured bondholders;

The events leading up to the nationalisation of Anglo Irish Bank in January 2009;

The reliance of the Irish banks in 2009 and afterwards on ECB funding. How that worked and at what price;

The decision to establish Nama and the consequences of that decision;

The events leading up the bailout in November 2010 and the role of the ECB in that;

The attempts of this Government to get the ECB to agree to “burden sharing” of the bank debt and why it failed;

The decision to liquidate Irish Bank Resolution Corporation and its consequences.