Bailout myth is a cocktail of half-truths and downright evasions

Opinion: Wide acceptance of an unreliable narrative about what happened means we may never get to grips with the actual facts 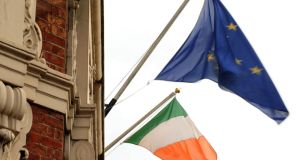 “Not content with denigrating the efforts of the Fianna Fáil-led government to cope with the crisis, the Coalition narrative has cast the troika as an alien force which imposed unnecessary hardship on the people.” Photographer: Aidan Crawley/Bloomberg

Political myths are often far more potent in shaping the reputation of parties and governments than the dreary reality involved in the everyday exercise of power.

In Ireland Fianna Fáil were traditionally the masters at controlling the popularly accepted version of the past. A partisan version of all that happened before, during and after 1916 was accepted by a large swathe of the electorate and helped to sustain the party as the biggest in the State for 80 years.

The economic collapse and the EU/IMF bailout changed all that. For the foreseeable future Fianna Fáil will be linked with the catastrophe that befell the country under its watch, epitomised by the bank guarantee of September 2008 and the bailout of December 2010.

The Coalition has successfully propagated a new political myth in which those two events are portrayed as the source of the country’s economic woes, when in fact they represented a desperate and largely successful effort to save the State from the disastrous consequences of the Celtic Tiger years.

Not content with denigrating the efforts of the Fianna Fáil-led government to cope with the crisis, the Coalition narrative has cast the troika as an alien force which imposed unnecessary hardship on people.

In its determination to claim all the credit for the bailout exit, the Government ruthlessly excluded EU leaders, never mind its predecessors in office, from any share of the glory.

Enda Kenny and Eamon Gilmore do deserve considerable credit for the way they have gone about the business of government for the past three years. They took office at a time when Fianna Fáil’s credibility was in tatters and the restoration of confidence both internal and external was a fundamental requirement.

Capacity to govern
It was essential for the health of our democracy that Fianna Fáil was replaced in office in the spring of 2011, regardless of whether or not it was broadly doing the right thing to get the economy back on track, because by that stage the people had lost all confidence in its capacity to govern. The party paid a massive political price for its failures and it is difficult to see it returning to power any time soon. Its partner in government, the Green Party, has paid an even bigger price, with its very survival now in doubt.

It is some irony that the Greens who preached prudence during the Celtic Tiger years and warned repeatedly about the dangers of relying on the construction industry should now face extinction as a result of going into government with those who fuelled the boom.

In government the Greens showed courage when the roof caved in by sticking with the decisions required to stave off disaster rather than running away at the first opportunity.

Neither Fianna Fáil not the Greens get any credit for it now but by the time they lost office in the spring of 2011, almost two-thirds of the painful budgetary adjustment required to put the economy back on track had already taken place.

By that stage the troika had arrived on the scene to ensure that the rest of the job got done. The discipline imposed by the troika ensured the recovery programme was completed on time earlier this month.

However, the simplistic bailout myth in which Fianna Fáil is blamed for the wrong things, and its real failures ignored, while the troika is depicted as a foe rather than a friend, carries the seeds of future trouble.

On a practical level it is hardly a surprise that senior EU politicians retaliated by pouring cold water on the Government’s plans to shift a chunk of the national debt caused by the Irish banking crisis over to European institutions.

Much more importantly, the wide acceptance of unreliable narrative about what happened over the past five years means that we may never get to grips with the actual facts of the boom and bust.

It is only right and just that the government which presided over the excesses of the boom should take primary responsibility for all that went wrong, with the bankers and regulators coming a close second. Senior public servants, the then Opposition parties, trade union leaders and the media too, for the most part, failed to understand what was happening and responded too slowly or even obstructively when the crisis struck.

Reducing it all to a simplistic narrative of how the Coalition led the country out of the bailout may make political sense for the parties of government but it serves to obscure the real failures that led to the crisis.

The great journalist and writer Con Houilihan used to remark on the way Irish public opinion moved like a flock of starlings: all veering one way in a great cloud before suddenly turning and going together in the opposite direction.

For decades after independence Ireland was dominated by a republican and Catholic narrative that obliterated the memory of the Home Rule movement, the involvement of tens of thousands of Irish men in the first World War and of others in normal policing duties at home.

Narrow version of past
The existence of a more tolerant cultural and religious climate, as well as a broader international outlook in the decades before independence, was also suppressed in a narrow version of the past that stressed violence and blood sacrifice.

Thankfully, a century after the great events that led to Irish independence, a more balanced and inclusive narrative has now gained wide acceptance but it has taken a long time for that to happen.

Flaws in its founding myth held the country back from achieving its potential for long enough. The acceptance of a new one is the last thing we need.