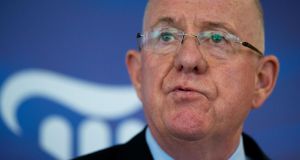 Minister for Justice Charlie Flanagan also hopes to give effect to the divorce and blasphemy referendum results this year. Photograph: Tom Honan

Minister for Justice Charlie Flanagan is to introduce a new law that will grant applicants for Irish citizenship the right to be absent from the country for a set period of time.

Mr Flanagan said the urgent draft legislation will address a significant decision made in the High Court earlier this summer whereby a judge ruled that an applicant for naturalisation must have “unbroken” residence in the State for an entire year before the date of their application.

The Minister’s discretionary practice of allowing applicants six weeks out of the country, for holiday or other reasons, and more time in exceptional circumstances, was not permitted by law, Mr Justice Max Barrett ruled.

Mr Flanagan said he had a first draft of the new law to address the issue, which he acknowledges has caused considerable concern to applicants over the summer.

He acknowledged the concern around the issue.

“What I propose doing is to allow for a period of time for an applicant to be out of the jurisdiction. I think that’s necessary for a number of reasons,” he said.

“We have applicants who may be working in Northern Ireland, people who go overseas for work for a period of time, people who might even go abroad for their wedding. The literal interpretation of the law requires change on my part and I intend doing that shortly.”

He said there are three groups of people who are concerned, namely those who have had their citizenship granted, those who are in the process and those who wish to apply but haven’t yet done so.

The Minister said he had not yet decided what length the period of time such absences would extend to and that he would discuss the issue with the Opposition in the coming weeks.

Mr Flanagan also said he would be prioritising and hoping to have passed by the end of this year legislation to give effect to the divorce and blasphemy referendum results.

His review is looking at all aspects of how trials are carried out and examining issues such as video-link evidence and defendants’ anonymity.

Mr Flanagan said he expected an update on this work in the coming weeks and said the body of work had expanded beyond what was originally expected.

Another body of work in relation to familicide is due back to Mr Flanagan by next spring, he said.

In May the Minister announced that former Tusla chairwoman Norah Gibbons would oversee the new study into familicide. This came about after a meeting between Mr Flanagan and the family of Clodagh Hawe.

“We were looking at next March or April, and we are firmly on course for that. I intend to meet her for a progress report over the next two to three weeks,” he said.

“This is a really important body of work arising out of a very poignant but hugely informative meeting that I had here in this office earlier this year with [Clodagh Hawe’s] family. I’m very keen to ensure that the type of trauma that was visited upon that family by weaknesses in State supports at a time of huge vulnerability will not happen again.”