Arts not ‘appreciated or understood’ by the State 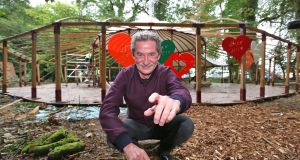 The Government does not give the Arts the respect it deserves, despite the huge success of Irish artists, writers and performers in recent years, according to Philip King.

Founder and producer of the Other Voices live music series, King contends that the Arts are still not regarded by policy-makers as a “core value or strategic asset for a small country in a fast, competitive, global marketplace”.

The Dingle-based festival held during the off-season has become a huge event with an international reputation and has attracted some globally renowned musicians to play live in tiny venues in the Kerry Gaeltacht each year. They have included the late Amy Winehouse; Snow Patrol, Florence & The Machine, Sinéad O’Connor; Glen Hansard; Jarvis Cocker; The National, and Marina & The Diamonds.

Despite its huge reach – celebrated BBC DJ Annie Mac was among its guest presenters and performers this year – the event remains a huge challenge for King and his small team to put on. It has experienced reductions in financial support from State agencies in recent years, notwithstanding the boon it gives to tourism in Dingle and its surrounding hinterland during the quietest period of the year.

“Over the last 14 years, Other Voices has remained focused on producing a tiny event with global reach, and it works because of trust,” says King. “And because we continue to assert the primacy of arts, creativity and authenticity as some of our most important assets.”

He says these qualities are not sufficiently appreciated or understood by the State or by governments, because it cannot be easily defined or captured in a readily graspable way.

“Maybe part of it is because there is a messiness here. You cannot deliver a forecast in (a linear way). You can’t dance to the metric. You can’t evaluate the thing that is priceless. In the world of big data, we are so in thrall of data that we will miss the real things.”

King (a respected musician, music documentary maker and broadcaster in his own right) says his agenda and that of Other Voices is to stay loyal to being authentic. He says the question needs to be asked about how the current flourishing of arts and creativity could be sued to attract people to Ireland.

“How can Ireland get its act together, harness all of the edge and advantage that our creative people represent, and what needs to happen to make Ireland a place that our people want to come back to?

“For us, and for our competitors – including our next-door neighbours in Britain – creativity and creative industries offer hope and potential, but for some reason creativity and the arts are still seen as an ornamental add-on to policy.”

To that end, he says Irish artists embody the values which the rest of indigenous exporting service and product industries must emulate – authenticity, excellence, creativity, inclusiveness, differentiation.

“Culture remains the strong and welcoming link, when many others have been severed, between the home tribe and the Irish diaspora. Moreover, many Irish artists have successfully navigated this gap professionally and commercially, and perhaps with more nuance and skill than many other segments of the population and industry.”

“If we can continue to be entirely in thrall to data and metrics, we will miss the gold in my view.”

The 14th season of Other Voices begins on RTÉ 2 television on Saturday at 11.15pm. Guests this season include Jack Garratt, Lapsley, Little Simz, Gaz Coombes from Supergrass and Glen Hansard.