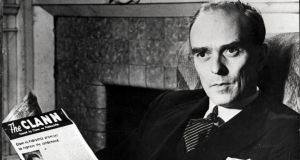 Sean MacBride: his first action after his appointment as minister for external affairs in February 1948 was to draft a message from the government to Pope Pius XII.

The subservient attitude to the Catholic Church of Seán MacBride, one of the leading republican figures of 20th-century Irish politics, is revealed in a selection of documents from the archives to be published this week.

A selection of correspondence between MacBride and senior Catholic bishops is one of the highlights of volume IX in Documents on Irish Foreign Policy 1948-1951, edited by Michael Kennedy of the Royal Irish Academy.

MacBride, a founder of the radical republican group Saor Éire and a chief of staff of the IRA during the 1930s, was leader of Clann na Poblachta and minister for external affairs in the first inter-party government, which held office from 1948 until 1951.

His first action after his appointment in February 1948 was to draft a message from the government to Pope Pius XII. He sought and received the approval of his cabinet colleagues for the message to be sent in the name of taoiseach John A Costello.

The message read: “On the occasion of our assumption of office and our first cabinet meeting, my colleagues and myself desire to repose at the feet of Your Holiness the assurance of our filial loyalty and devotion as well as our firm resolve to be guided in all our work by the teaching of Christ and to strive for the attainment of a social order in Ireland based on Christian principles. John A. Costello. Prime Minister.”

It had been assumed until now that the message was sent on the initiative of Costello, who was a devout Catholic, but the archives show that it was drafted and dispatched at the behest of MacBride.

Two months later, on April 2nd, 1948, MacBride wrote to the Catholic primate of All Ireland, the Archbishop of Armagh, John D’Alton, expressing a willingness to take church direction.

“I should be very indebted to Your Grace if Your Grace would say a prayer asking God to give me the wisdom necessary to carry out my new duties well and faithfully. I trust that if at any time any matter arises upon which Your Grace feels disposed to give me advice, formally or informally, that Your Grace will not hesitate to do so. I shall always welcome advice and be entirely at Your Grace’s disposal.”

The minister also sought the advice of the powerful figure of John Charles McQuaid, the archbishop of Dublin, on a variety of subjects.

Two letters in August 1948 capture the tone. The first was in response to a letter from Dr McQuaid thanking him for the way his department had facilitated the transfer of financial aid to Catholic political activists in Italy.

My dear Lord Archbishop, I cannot adequately express the intense pleasure it gave me to receive Your Grace’s very kind letter conveying our Holy Father’s thanks.

I feel, however, that I do not deserve any special thanks. The real work was done by Your Grace, without whose tireless help and intervention I would have been powerless. I should like to take this opportunity of expressing to Your Grace my indebtedness and gratitude for the prompt and wholehearted manner in which Your Grace took up this matter.

If I may so, I feel that Ireland’s contribution, for which Your Grace was in the main responsible, was of very material help to the Italian Catholics in their hour of stress and to the cause of world peace.

My part was a very small one, but it was both an honour and a pleasure to have the opportunity of cooperating with Your Grace in this important task. I remain my dear Lord Archbishop,

Your obedient and sincere Servant,

More significantly, the documents also show that MacBride was engaged in regular consultation with the archbishop about government policy. For instance a letter on the issue of emigration sent by the minister to Dr McQuaid on November 1st read.

I enclose as promised

a) Copy of the proposal I am bringing before the government concerning the emigration of young girls.

b) Minutes of conversation with Monsignore Paro.

c) Copy letter from the ambassador to Monsignore Montini.

It would be of tremendous assistance if Your Grace could obtain the views of the Youth Unemployment Commission concerning the proposed stoppage of the emigration of young girls. Should the commission support the raising of the age to over 21, I would be delighted.

When Your Grace has had an opportunity of reading the other two documents, would Your Grace be good enough to return them for my files here.