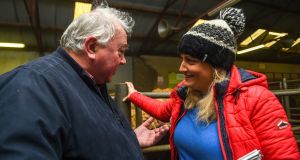 Aontú councillor Sarah O’Reilly is initially heard before she is seen at the mart in Clones, Co Monaghan.

The loudspeaker attached to the small van displaying her photo and the party’s logo plays a recording of her voice:

“Vote for change, vote for Sarah O’Reilly, your Aontú candidate from Cavan-Monaghan. Come out on February 8th and vote Aontú number one for life, unity and economic justice.”

The constituency race has opened up, with the four-seater increasing to five. Sinn Féin’s Caoimhghín Ó Caoláin has retired but the party’s MEP Matt Carthy is his successor.

O ’Reilly is the best chance of a second seat for Aontú, the party founded by former Sinn Féin TD Peadar Tóibín, who left over his opposition to support for repeal of the Eighth Amendment on abortion.

She left Fianna Fáil over the party’s change of direction and topped the poll for Aontú in Bailieborough, Co Cavan, in the local elections.

“Being pro-life was seen as something that wasn’t right. I’m unashamedly pro-life,” she says, but “I don’t think people call me the pro-life candidate at all. There’s plenty of people who voted for me who are pro-choice.”

Rural community decline, beef prices, the increase in commercial rates for struggling businesses and the controversial cross-Border electricity interconnector that will create a “metal spine” of 420 pylons down the east coast are among the issues she deals with on a daily basis.

Candidates tend to bring media to places where they are known and popular, but O’Reilly goes outside her comfort zone to the other side of the constituency, a 40-minute drive to the Clones heartland of Fine Gael poll topper Heather Humphreys.

O’Reilly is comfortable and confident in the mart; her background is in farming and she spent 18 years as a contractor, ploughing, tilling, reseeding for other farmers. She left school at 16 when she had a baby, but later went to college to become an accounting technician.

Her contracting business folded in the downturn and she became an international buyer for parts for air tools used in diamond mines.

The 44-year-old’s start in politics was canvassing for Fianna Fáil TD Niamh Smyth, who lives across the road from her in Bailieborough, with Fine Gael Senator Joe O’Reilly just down the road. In 2016 she was co-opted to Smyth’s seat on Cavan County Council when the latter was elected to the Dáil.

O’Reilly became an administrator for Fianna Fáil Senator Robbie Gallagher, also a Cavan-Monaghan candidate, but left because she felt it was a conflict of interest when she had joined Aontú. “Robbie understood, I think. He was very good to me.”

All her children, four sons aged 21 to 27, have emigrated. She becomes emotional as she explains that her 22-year-old left for Melbourne the night before this canvass. Her three other sons are in Canada. All of them were farmers but they could not make a living in Ireland and the family farm was sold.

“I’m a victim of successive government failures and the high cost of living with the low return [for farmers],” she says.

O’Reilly’s small team of canvassers, including her partner, Adrian, who drives the van, is accompanied by former Fine Gael councillor Yvonne Newell, an anti-abortion campaigner who has lived in Clones for more than 40 years and whom O’Reilly meets for the first time on the canvass of the mart.

In the mart, noisy with bellowing cattle, are a lot of shy farmers, reluctant to talk, be named or photographed.

A few are happy to identify themselves, however. John Sheanon, a farmer from Carrickaboy, Co Cavan, says “she might be entitled to a vote as much as anybody else”.

Some of the small farmers here attended the protests in Dublin, angry that the larger farming organisations have not supported them.

O’Reilly hands out her leaflet, the first page of which has the headline “Standing up for farmers”.

“Have a read of it and I’d appreciate your support,” she says. One farmer admits “I don’t know that lady at all”, but another explains she’s a poll topper in Cavan for Aontú.

Jim Duffy, a farmer from Monaghan who is at the mart with his nephew Barry, has met quite a few of the candidates and says of the Aontú candidate: “Sure why wouldn’t I give her a vote?”

Farmer Kieran Tierney asks about her policies. “We are concerned about supporting family farms, sustainable farms,” she says. “I think people are looking for a change. I’d be a strong, capable person in the chamber, well able to ask the hard questions.”

John McNally from the Diamond in Clones says, “If I could find a clown on the ballot paper, I’d vote for them”.

Cynical and angry about politics, he adds that “I’d love her to do well, but you’d not send anybody up to Dublin ’cos they’re going to corrupt them. They have no hope. Once you go in against the Dublin elite, you’re told ‘Sit over there and I’ll speak to you in five years’.”

In the town the reaction is polite and positive. “I’ll keep you in mind, don’t you worry about that,” says one man. At one house during the lunchtime canvass, the conversation is conducted through the letterbox, and the woman tells her to drop a leaflet in and she’ll read it carefully.

At another door the man asks what Aontú means. “Aontú is the Irish for agreement or unity. We’re very much for rural communities and more supports for rural areas.”

The only time abortion is referenced by householders is when one man sees the Aontú leaflet and tells the candidate, “Ah, I’m pro-choice, sorry about that”. A few doors up, Anna, who is anti-abortion, is delighted to meet O’Reilly, telling her she has taken part in anti-abortion protests in Dublin.

At another, Marie says she is “not a bit interested” in any politician, has not voted for 35 or 40 years, and bins all leaflets as soon as they arrive in the door.

Aontú has an outside chance in Cavan-Monaghan but on a really good day for the fledgling party, O’Reilly could surprise. “People are looking for change,” she says, hopeful against the odds that she could be that change.