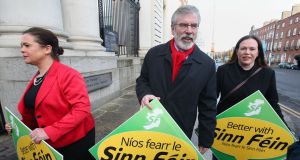 Sinn Féin leader Gerry Adams has said he would not like to think prominent republican Thomas ‘Slab’ Murphy’s tax offences will become a big issue for the party in the general election campaign.

Mr Adams said he did not see a BBC Spotlight documentary on Tuesday night which explored what the recent conviction of Murphy, who Mr Adams subsequently described as a “good republican”, might mean for Sinn Féin in the election.

Asked at the party’s first press event since the election was announced if he thought Murphy would feature prominently during the campaign, he replied: “I wouldn’t like to think so and I didn’t see the programme”.

Regarding Murphy, he said: “He isn’t to my knowledge standing in the election.”

Murphy, of Ballybinaby, Hackballscross, Co Louth, is awaiting sentence after being found guilty by the Special Criminal Court in December of failing to furnish tax returns for nearly a decade from 1996.

Sinn Féin would “conclude on” its manifesto on Wednesday afternoon, Mr Adams said. He said the document was finished but “a small number of us have to sign off on it this afternoon”.

Mr Adams has previously said the abolition of the Special Criminal Court is one of his party’s “key objectives”, but may not appear in its general election manifesto.

Asked how many seats Sinn Féin might secure in the election, Mr Adams said he did not know but was hoping for more than 14, which is the party’s current tally.

“Any improvement on that would be a good day for us. A good day, if I may say so for the citizens of this State and of this island.”

He said Taoiseach Enda Kenny’s decision to call the election was probably the best decision he had made.

Sinn Féin has signed up to the Right 2 Change policy principles, formulated after consultation with community groups, trade unionists, and independent politicians.

Mr Adams said Sinn Féin was committed to ending property tax and water charges. It had a plan for universal health care, for public services and social housing.

“Essentially this is a choice between whether you want a society which is fair and equal or whether we have more of the same that we’ve seen under Fine Gael and Labour.”

Mr Adams said his party had never been against wealth. During the “Celtic Tiger” years, Sinn Féin had argued for surplus funds to be invested in infrastructure, public services and sustainable jobs, he said.

“What we’re seeing now is boom and bust. As you would manage your own household we think you need to be prudent. We think we’re being very fiscally responsible.”

Mr Adams said he would like to serve the people in whatever capacity they wanted. “If it’s their wish I would come forward and serve them in a capacity as Taoiseach.”

His party was offering a “republican alternative” to the outgoing Government, he added.