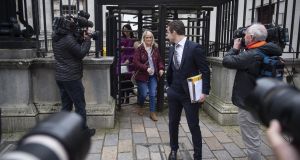 A Belfast woman who challenged Northern Ireland’s abortion law is “massively relieved” after it was found to by a court to have breached UK human rights commitments with regard to cases of fatal foetal abnormality.

Sinn Féin, the Alliance Party, the Greens and Amnesty International welcomed the Belfast high court ruling, but it was criticised by anti-abortion groups. The DUP noted that the High Court judgment referred to “a narrow set of circumstances”, and said that Northern Assembly should now deal with the issue.

On Thursday Justice Siobhan Keenan found Sarah Ewart was a victim and did have the legal standing to challenge the law after an earlier UK supreme court case brought by the Northern Ireland Human Rights Commission did not meet those requirements.

Ms Ewart travelled to London in 2013 for an abortion after her daughter was diagnosed with anencephaly and doctors said she would not survive outside the womb.

In light of pending changes to the North’s strict abortion laws through Westminster, if Stormont is not restored by October 21st, the decision on whether the judge needs to make a formal declaration on Ms Ewart’s challenge is expected to be decided next week after submissions from parties involved in the Belfast case.

Alliance Party deputy leader Stephen Farry MLA welcomed the ruling but said “it is a shame the Assembly didn’t address this when it had the chance, despite the efforts of some MLAs. Today’s ruling reinforces the basis for Westminster legislating in the absence of a functioning Assembly, reflecting fundamental issues around rights and equality.”

“Sinn Féin believes that this and all outstanding rights issues in the North of Ireland should properly be dealt with, not at Westminster, but by locally accountable politicians in the Assembly.

“Sinn Féin’s focus remains to get the political institutions up and running on the basis of equality, rights and respect so that we can address all of these important issues. The DUP’s anti-equality agenda, the confidence and supply deal with the Tories and Brexit remain the obstacle to this.”

DUP MLA Carla Lockhart said she recognised the tragic circumstances which led to today’s court case. However, she said the High Court judgment referred to “a narrow set of circumstances. The judgement in no way found that there is a requirement under the European Convention of Human Rights to allow for abortion on request for any reason up to the point of viability. There is no human right to abortion on request.”

Referring to Michelle O’Neill’s comments, Ms Lockhart said the issue should be dealt with at the Assembly. “The Democratic Unionist Party is ready to return to Stormont tomorrow with no preconditions and we are prepared to engage on this issue. The Northern Ireland Assembly is where this issue should be decided following consultation with the people of Northern Ireland and a proper legislative process.

Green Party leader Clare Bailey said she looked forward to the process of abortion decriminalisation beginning on October 21st “and the implementation of necessary healthcare provision for women at the soonest point possible”.

Bernie Smyth, director of anti-abortion group Precious Life, said it was “a very sad day” but it was not the end of the road for pro-life campaigners, who would continue in their efforts to “protect the unborn”.

She criticised Stormont politicians for “not being in post at this time”.

“I would say to the DUP and Sinn Féin get back in office and protect the most vulnerable in society,” she said.

Dawn McAvoy from Both Lives Matter said: “We warmly welcome that the two main parties have both now stated publicly that any change to abortion law here should properly be dealt with, not at Westminster, but by locally accountable politicians in the Assembly.”