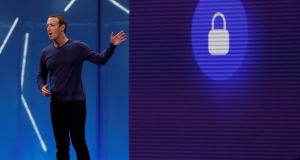 Facebook chief executive Mark Zuckerberg. The move by the company to no longer accept foreign advertisements relating to Eighth Amendment referendum will come as welcome news to some on the Yes side of the campaign. File photograph: Stephen Lam/Reuters.

The move by Facebook to no longer accept foreign advertisements relating to the upcoming referendum on the Eighth Amendment will come as welcome news to some on the Yes side of the campaign.

There has been rising concern among some pro-repeal groups and supporters that the referendum could be swayed in its decisive weeks towards a No vote by an avalanche of online ads.

Facebook’s move is likely to be directly related to this fear: and a fear that if the referendum were defeated, the company would face questions about its role in influencing votes, as it has in the US and UK.

In the past fortnight, there has been a rising sense of pessimism in some repeal quarters that the campaign was slipping away from them. Yesterday, the transparency campaigner Gavin Sheridan tweeted that it was now his view that the No side would win the campaign because its online spending was dwarfing that of the Yes campaign.

Sheridan was giving voice to the private views that have become increasingly common among some influential repeal campaigners. (Needless to say he was monstered online by some repeal supporters for being insufficiently supportive). The repeal side, he said, “is not at the races”.

My two cents; the polls are wrong. No is ahead. Voter registration notwithstanding the result will be extremely tight, and No will edge it. But still weeks to go.

No campaigners have mustered a powerful online campaign, with observers (many of them repeal supporters, it should be said) reporting a surge in ads in the last week or so. Privately, some senior figures in the No campaign doubt if religiously-inspired anti-abortion online ads are helping them win the soft repeal voters whose minds they need to change if they are to win.

However, despite the fears of the repealers (and the hopes of the retainers) if there is a big change going on in the campaign, the polls have not yet picked it up. A Sunday Independent poll at the weekend showed a strong – albeit diminished – lead for the Yes side. It was consistent with all the polls published in recent months.

It is possible – if most unlikely – that all the polls, every one of them, have been wrong; that there is a big No vote out there and people are lying to pollsters about.

It’s more likely, however, that a big move hasn’t occurred in the campaign. There has been some weakening of the Yes vote, but not a sufficient strengthening of the No vote to fundamentally change the picture that emerged at the start of the campaign. That’s not to say that such a change couldn’t happen in the last fortnight; but there’s no evidence that it has happened yet.

By and large, the offline public-political discourse has been managed in terms of reasonable civility, with both sides – mostly – acknowledging their opponents’ right to differ. The posters of aborted foetuses, which many people find deeply distressing, are an exception. But by-and-large the debates have not been offensive, abusive or hate-filled. The canvass reports from both sides stress respectful engagement on the doors.

The online campaign has been different – vicious, personalised and offensive.

And with a campaign that is tightening as polling day approaches, the online element will be more important than ever before.

There are enough people on either side who believe that the online campaign can be decisive to make it a key battleground in the remaining fortnight. Facebook’s move will do little to alter that.