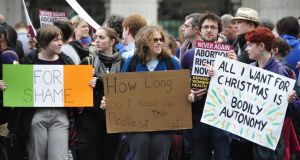 In order to advance their view on the abortion issue the campaigners on both sides seem determined not only to take side swipes at politicians opposed to them but to denigrate the entire political class. Inevitably, they each view the political process around this most sensitive of issues through a subjective lens. As a consequence, each side asserts that the failure of politicians to do what they would like them to do arises from indifference to women or unborn children and/or cowardice in dealing with a difficult issue and/or reluctance to oppose powerful conservative/liberal forces.

The reality is that few issues have consumed as much space in political debate and absorbed as much political energy in this country in the last three decades as abortion. Any assessment of public opinion on abortion in Ireland, as elsewhere, is hazardous. However it seems clear that a majority in this country are now of the view that the 1983 constitutional amendment should never have happened in the terms it did.

The Eight Amendment didn’t happen in secret or by accident. The campaign for that amendment may have been organised by strongly conservative groups but, on the abortion issue, their view accorded with the overwhelming majority of the population. The Eighth Amendment came after both main political parties promised such an amendment in the previous general election. It happened after a majority of the democratically elected members of the Dáil and Seanad passed legislation to put the proposal in those terms to the people. Two-thirds of those who voted on September 7th, 1983, voted in favour of the amendment and did so despite clear warnings from many legal and political voices of the possible consequences.

In the wake of the X case in 1992, the Albert Reynolds-led government successfully proposed a referendum to permit travel for and information about abortion. However an accompanying proposal that would have allowed abortion only on grounds of threats to the life of the mother other than suicide was resoundingly defeated. The No majority in that referendum comprised voters who wanted to go as far as or further than the X case and those who felt the Reynolds proposal went too far.

In 2002 Bertie Ahern, having promised to do so in the previous election and again after months of parliamentary deliberations in the All Party Committee on the Constitution put a proposal similar to the 1992 proposal to a referendum. This proposal was narrowly defeated by just 10,556 votes on a turnout of more than 1.2 million. It is worth remembering that just 12 years ago there was almost a majority not only for retaining the abortion ban in the Constitution but for further narrowing the grounds for abortion from those outlined in the X case.

There are well-co-ordinated campaigns operating on both sides of the abortion debate in Ireland at the moment. One has an agenda to retain article 40.3.3 inserted by the 1983 referendum and have it legally interpreted and legislatively implemented as restrictively as possible. Campaigners on the other side seek to delete article 40.3.3 and leave the Constitution without any reference to the substantive issue. The reality is that there is not a majority for either of those positions at the moment: the ground has shifted in the last 12 years but not in the direction the pro-life side would like or to the extent the pro-choice side seek to suggest.

It is impossible to legally square the round hole left in the constitutional position by the Eighth Amendment. This can only be done by amending the article or deleting it altogether. There may now be a majority among the electorate for a law that would allow for abortion in certain circumstances such as foetal abnormality or in cases of rape. However no such law is possible unless the Constitution is amended and there is no consensus on how the current provision could be amended.

On the other hand, there is no majority for deleting the amendment altogether. Criticism of our current laws from UN committees in faraway chambers or in Guardian editorials, or months of deliberations in a constitutional convention will not change that anytime soon.

Because they are in direct touch with the electorate Irish politicians know this and that is why they repeatedly say there is no appetite for another referendum. Politicians are understandably reluctant to spend even more time and energy on constitutional proposals that have no real prospect of being passed or lawmaking that would do little to alter the plight of those in crisis pregnancies in the absence of constitutional change. Many might wish it otherwise but that is the political reality.