PSNI estimates about 700 protesters are taking part in the demonstration 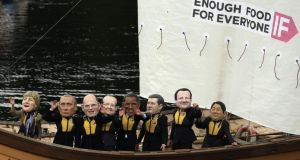 Protesters from the Enough Food For Everyone IF coalition, wearing giant G8 leaders’ heads, sail in a Viking-style boat close to the Kellyhevlin Hotel, close to the G8 venue of Lough Erne, in Enniskillen. Photograph: Matt Cardy/Getty Images

A peaceful anti-G8 protest is taking place in Enniskillen, Co Fermanagh, close to where global leaders are meeting for the annual G8 summit.

Campaigners are marching from Enniskillen library to the security cordon surrounding the Lough Erne resort where the meeting is taking place.

The march is a relatively small-scale affair compared to the mass rallies which have taken place at previous G8 summits. The PSNI estimates about 700 protesters are taking part in the demonstration but other estimates put the figure closer to 2,000.

Frank Duffy, from a local anti-fracking campaign, said he thought a people had been dissuaded from attending because of security-focused media reports. “Locals are scared stiff to be seen down here,” he said. “The media hyped it up.” The group of protesters is comprised mostly of trade unionists, anti-capitalists, and a vocal cohort of anti-fracking campaigners.

Socialist Party TD Joe Higgins said the protesters represent the views of millions of people worldwide. He added that it was “no coincidence” that trade unions, socialists and environmentals were strongly represented because “the policies of the big capitalist leaders affect all those areas of life”.

An extremely heavy police presence has been clearly visible in Enniskillen during the weekend with regular convoys of armoured Land Rovers partrolling the town and armed PSNI members stationed along streets and bridges. People Before Profit TD Richard Boyd Barrett, who is among the protesters said Lough Erne had been specifically chosen to limit protests.

“The G8 strategically selected the North and from their point of view it was quite a cute decision because obviously it is geographically difficult to access for people from Europe,” he said. He also said the “huge security hysteria” was “designed to scare people... it’s not surprising that it would have an impact.”

Earlier this afternoon a flotilla consisting of two viking-style long boats passed by the castle as part of the ‘Enough Food for Everyone’ IF campaign.

A spokeswoman said the organisation was calling on the G8 to tackle tax havens which “syphon money away from poor countries”. A second flotilla, organised by a coalition of local campaign groups mainly opposed to fracking—a shale gas extraction method which has been proposed for areas of some Border counties—also took place this afternoon. Some protesters have expressed disappointment, if not surprise, at the relatively low turnout. Along with the relatively remote location and security detail, they said the refusal by Fermanagh District Council to arrange official camping facilities put off a lot of international campaigners.