To see or not to see: Artist creates tiny Shakespeare sculpture 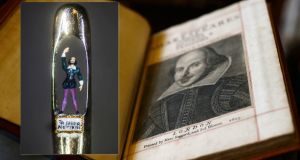 World-renowned artist Willard Wigan has created a microscopic sculpture of William Shakespeare, which is smaller than a full stop in a newspaper, to mark the 400th anniversary of his death.

The artwork has been placed in the eye of a needle and depicts the playwright striking a celebratory pose dressed in a teal tunic and purple stockings, with an Elizabethan-style frame underneath and the words “To see or not to see”.

Sculpted out of Kevlar and fragments of cable tie, Wigan used 24-carat gold for the frame around the quote.

It was painted using a floating fibre plucked from the air as a paintbrush, and polished to a shine using microscopic fragments of diamonds.

The tiny Shakespeare, which took four weeks to create, is part of an exhibition of Wigan’s work at the Light House Media Centre in Wolverhampton, UK, celebrating key figures from the Midlands.

Wigan, who was born in the city’s Wednesfield area, said: “I had to control my heartbeat and the pulse movements in my fingers to create this piece; it took every ounce of my skill and took a lot out of me.

“Like me, Shakespeare was from the heart of England, and his work made Britain lead the way, culturally, for the whole world.”

The artist worked “day and night’” to complete the piece.

“Shakespeare is the greatest storyteller the world has ever known, and as I am the world’s leading micro-sculptor, I wanted to honour him in the best way I can,” he said.

“The most difficult aspect was getting his proportions right, but I am really pleased with the result.”

Following the exhibition, which ends on May 2nd, the piece will be auctioned internationally.

Also on display is the world’s smallest sculpture — a motorbike the size of a blood cell, suspended within one of Wigan’s own chin hairs.

Shakespeare is believed to have died on his birthday, April 23rd, in Stratford-upon-Avon in 1616.