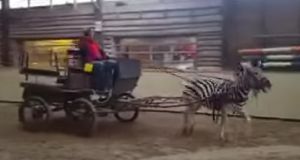 The inquiry began after a video of a zebra pulling a carriage and an image of a man on a zebra’s back were circulated on social media.

The Irish Society for the Prevention of Cruelty to Animals (ISPCA)’s investigation into a zebra being kept in Co Laois has prompted it to call for exotic animal legislation.

The inquiry began after a video of a zebra pulling a carriage and an image of a man on a zebra’s back were circulated on social media.

The ISPCA said it found no evidence of cruelty .

It said the zebra owner was “fully compliant with equine identification regulations” and as a result theISPCAhad no grounds to take action.

However it would be “ consulting with the owner with a view to finding the animal a suitable permanent home,” the statement said.

It said the inspection found “that some of the images and video posted on social media did not actually feature the zebra in Laois.”

It said no offences under the Animal Health and Welfare Act were identified “but they spoke to the owner in relation to the treatment and use of the animal” .

The ISPCA said some species of zebra are protected under international conventions. However the plains zebra (Equus quagga) is not listed.

“Therefore no permit is required to buy, sell or keep a zebra in Ireland or any other country, nor is it an offence to import one from another EU member State.”

ISPCA chief inspector Conor Dowling said that unlike the UK, Ireland does not have a dangerous wild animals act.

“We would like to see more control over the keeping of exotic species and particularly the large ones,” he said.

Mr Dowling said the authorities would try and find reasons to prevent animals such as large cats entering the country. However once they are here there is little control, he said.

The ISPCA has a campaign aimed against the use of wild animals in circuses and would also like to see legislation for more control on certain species, he said.