Pancake Tuesday: Irish people love to go on the batter

Most will eat 2.5 pancakes on Shrove Tuesday before the Lenten season of ritual fasting 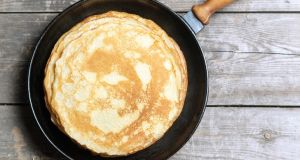 Irish people will go on the batter in a big way this week by eating more than 12 million pancakes on a single day.

This is despite the fact a significant number have no idea where the term Shrove Tuesday comes from.

The average person will eat 2½ pancakes on Tuesday with most people marking the day in some way, according to a survey. The Siúcra survey puts the number of pancakes likely to be eaten on that one day at a surprisingly precise 12,173,606.

It also found that a third of the population does not understand the meaning of the day. The tradition of eating pancakes on Shrove Tuesday, known in some quarters as Pancake Tuesday, has been celebrated for centuries. The word Shrove is derived from shrive – or absolve – although in some countries the term Mardi Gras (“fat Tuesday” in French) is preferred while many Spanish countries celebrate Carnaval on the day with wild parties to mark the occasion.

The day is the final night of Shrivetide and involves eating rich food ahead of the ritualistic fasting of the Lenten season, which starts on Ash Wednesday.

The Siúcra survey found that 70 per cent of Irish people will make their pancakes from scratch while 20 per cent will rely on a ready mix and 6 per cent will eat ready-made pancakes.

While most people will take the DIY route this week, 31 per cent of those polled admitted to not knowing the ingredients of batter – flour, eggs, milk and oil – with men significantly less likely to know what is in a pancake than women.

The gender divide is also apparent in the flipping stakes. Traditionally pancakes are flipped in the pan but less than half of those who make pancakes on Tuesday will try their hands at flipping with men significantly more likely to give it a whirl than women.

Irish people prefer sweet toppings with only 12 per cent choosing savoury options. On 38 per cent, lemon and sugar is the nation’s favourite topping followed by maple syrup on 20 per cent and chocolate spread on 15 per cent.

The nationally representative survey was conducted in February 2017 by Empathy Research through an online survey of 1,003 people.