‘What we want to teach our children is that if they have a dream, they can accomplish it’

In January 2000, Herman and Candelaria Zapp began what they believed would be a six-month trip from Argentina to Alaska. Video: Sorcha Pollak/Irish Times Video Team 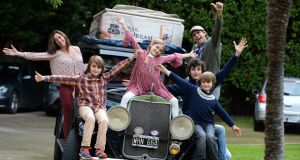 In January 2000, Herman and Candelaria Zapp stepped inside a vintage car, turned on the engine, and began what they believed would be a six-month trip from Argentina to Alaska. The young couple had £3,000 in their pockets, just enough to see them through their last big adventure before they returned to Buenos Aires to start a family.

Seventeen years and nine months later, that same vintage car, a 1928 Graham-Paige, now covered in maps, photographs and memorabilia from across the globe, pulls into the driveway of the Argentine embassy in Dublin. As the vehicle draws to a halt, the back doors swing open and three boys and a girl jump out, talking animatedly with the small group of well-wishers who have gathered to meet this well-travelled family.

After the initial six months on the road, Herman and Candelaria ran out of money. With no funds to return to Argentina, Candelaria began painting watercolours, which they sold to make ends meet.

“We were able to finance ourselves, and said instead of going back let’s keep going,” says Herman. “If we can do it here we can do it anywhere. We were much more confident. It was a blessing running out of money.”

The couple had been travelling for two years and were in Guatemala when they decided to share their adventure with someone else, by starting a family. “We were so nervous because who was gonna take care of a family with kids but it was the best. It’s so beautiful to learn together and grow up together,” says Herman.

Pampa, who is now 15, was born in North Carolina. His brother Tehue (12) was born in Argentina during a brief visit home to visit Candelaria’s mother who was sick. Paloma (9) was born on Vancouver Island and Wallaby (8) was born in Australia. Candelaria has taken on the role as the children’s school teacher and follows an educational programme from Argentina.

“Imagine the chance to learn about the Egyptians and the next day go inside the pyramids. Or go to see the animal life in the Serengeti. Or go scuba diving in the Red Sea or at the Great Barrier Reef. Imagine the chance to stay in more than 2,000 homes. That’s the best part for the kids,” says Herman.

Candelaria adds, “What we want to teach our children, more than school, is that if they have a dream, they can accomplish it.”

Herman and Candelaria have written a book entitled Spark Your Dream which helps fund the family’s adventurous lifestyle. “People buy the book and help us to keep going but at the same time, maybe we are helping them with their dreams.”

Now, after nearly 18 years of travel and relying on the kindness of strangers for a bed each night, the family are on the final leg of their journey through Europe. They plan to cross the Atlantic on a wooden boat from the Canaries to Brazil before returning to Argentina to begin the next chapter of their lives. However, Herman does not plan to fall into the “routine lifestyle” he escaped nearly two decades ago.

“I believe that the worst thing for any relationship is routine because we are not made for routine. We are made for adventure and discovery,” he says.

And for those planning on setting off on their own adventure? “Just jump on it”, says Herman. “You will not feel ready because you are not. But the world is ready. Go and have faith. It will work out.”

The Zapp family will be outside The Goat pub in Goatstown with their vintage car from noon to 7pm on Wednesday, September 13th to meet people interested in hearing their story.