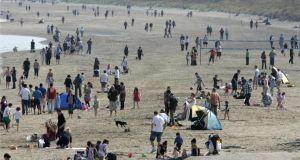 The number of beaches around the country who are to receive the coveted Blue Flag award this year has dropped by 15 per cent compared to 2012.

Some 70 beaches and four marinas are to be honoured with the flag – an overall drop of 13 on last year.

An Taisce – the organisation responsible for the operation of the Blue Flag programme in Ireland – said the drop could be attributed to stricter criteria that has been introduced.

The classification of the bathing water is now based on water samples from a four year period instead of results from a single bathing season.

“As a result, there was a predicted decrease in Blue Flags awarded in 2013,” said Ms Oliver.

The awards were presented by Minister for the Environment Phil Hogan at an awards ceremony in Dublin. He said the flags “raise environmental awareness and encourage good environmental behaviour among stakeholders”.

“These programmes give a sound guarantee of excellent quality and standards to tourists and promote a sense of pride among local populations and beach management staff,” he added.

Popular bathing spots in the Dun Laoghaire-Rathdown area of Dublin welcomed a return to Blue Flag status with Seapoint and Killiney scooping awards. The Royal Cork Yacht Club – a new marina – was the only other new addition.

The popular surfing location of Lahinch in Co Clare was stripped of its Blue Flag, along with Dublin beaches Donabate, Skerries South Beach, the Brook Beach Portrane, and the Velvet Strand in Portmarnock.

A number of other beaches that were awarded Blue Flags in 2012 missed out because of a failure to apply. These were Dollymount in Dublin City, old head in Mayo, Morriscastle in Wexford, Bunmahon in Waterford, and Cork beaches Redbarn, Garryvoe, Garretstown, and Barleycove.

Mullaghmore in Sligo could not be awarded the Blue Flag as a result of “ongoing issues with livestock roaming on the main beach area creating an unsafe environment for beach users”.