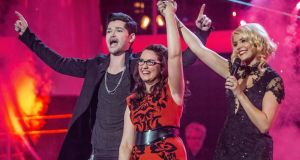 Andrea Begley from Co Tyrone with Danny O’Donoghue and Holly Willoughby, after she was crowned the winner of the this year’s BBC show The Voice. Photograph: PA

Andrea Begley was last night crowned the winner of The Voice — a victory she said she “never, ever, ever could have imagined” was possible.

The partially-sighted singer from Co Tyrone who has just 10 per cent vision, was rendered tongue-tied when her name was announced as the winner of the BBC show.

“I actually can’t speak,” she said. “I never ever ever could have imagined this.” Andrea, described as an “inspiration” by her coach Danny O’Donoghue from The Script, promised fans she would do her utmost to build on her win.

“Hopefully I’ll try my best to put your vote to good use and be a success,” she said.

Andrea - who beat fellow Northern Ireland contestant and hot favourite Leah McFall - had said being partially-sighted might help her in the final.

The winning singer has had to memorise the lyrics to her song choices because she cannot read them off a monitor during the show.

But she said she wanted to be judged by her music, adding: ”That’s the way I expect the industry to take me, on the basis of what I do musically.”

The singer joked that her lack of vision helps in some ways. She said: ”It sounds awful but I don’t have to look at everybody and sometimes that can be a good thing if they don’t look that happy to listen to me.”

1:05 'Whatever makes them happy' - Londoners on Harry and Meghan

Women to the fore as Sports Ireland announce Olympic grants 01:00
Churches urge faithful to exert pressure on politicians over housing 01:00
Call for hunters chase to be included in Dublin Racing Festival 01:00
Patrick Mullins confident Leopardstown ground will be ‘spot on’ for Festival 01:00
Gardaí suspect botched murder attempt was bid to avenge Mulready-Woods death 01:00