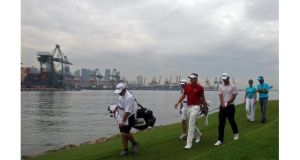 Ian Poulter and Adam Scott make their way down the seventh fairway before play was suspended at the Singapore Open. Photograph: Edgar Su/Reuters

Golf:Graeme McDowell’s challenge at the Singapore Open stalled in the final round before play was halted at the Sentosa Golf Club today. McDowell trailed Adam Scott by five shots when play was suspended and the title will not be decided until tomorrow morning.

The players were called off the course just before noon due to thunderstorms and lightning, and play was unable to resume until five-and-a-half hours later in drizzly rain and fading light.

Organisers decided to send the players back out despite having little more than 90 minutes of daylight left and said play would continue at 7.30am tomorrow morning.

Scott, the back-to-back winner in 2005 and 2006, was on 17-under-par after eight holes when darkness descended on the Serapong course and leads defending champion Ian Poulter by three shots.

South Korean Kang Kyung-nam is in third place on 13-under with US Open champion McDowell tied for fourth with Anders Hansen a shot further back.

A birdie at the sixth helped the Rathmore man recover from two disappointing bogeys in three holes that had followed a two at the par-three second. Martin Kaymer, who leads McDowell in the Race to Dubai standings, had improved to nine under after 12 holes.

Scott entered the final day with a one-stroke advantage over Poulter and Kyun-nam on 14 under par but there was nothing to separate the trio after three holes before thunderstorms led to the delay. Scott, though, picked up three birdies after the resumption to reach 17-under and move three clear.