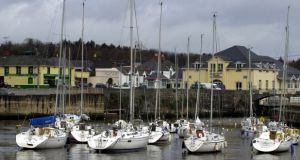 James O’Reilly from Dublin drowned on Saturday after going to the aid of three teenagers, including his son, who got into difficulties while swimming in Courtown harbour. Photograph: Patrick Browne

A man drowned on Saturday afternoon after coming to the aid of three teenagers who got into difficulties while swimming in the harbour at Courtown Co Wexford.

The dead man has been identified as 39-year-old James O’Reilly from Cabra in Dublin. He had travelled to the resort town with a group of school children who were to take part in a football match over the weekend.

The incident occurred shortly before 1pm when a group of three 14-year-olds, including the son of Mr O’Reilly, went for a swim off the end of the pier.

They got into difficulty in strong currents and were being swept out to sea when the victim went to their assistance.

Although the day was warm, the water was said to be freezing and in the strong currents all four got into difficulty.

Members of the Courtown RNLI Lifeboat volunteer crew were sitting an exam in a boathouse nearby and the lifeboat was immediately launched and was at the scene within minutes.

When it got there it was met by a Courtown Sailing Club dinghy rescue boat and the Courtown Sea Safari charter boat and the swimmers were pulled from the water.

The man was transferred to the Lifeboat where attempts at resuscitation began. The lifeboat docked and a local doctor assisted the crew until an ambulance arrived.

The man was pronounced dead on scene and taken to Waterford Regional Hospital where a post mortem was set to take place.

The teenagers were treated for hypothermia and shock but did not suffer any serious injury.