All participants believed to be safe, says spokeswoman after boats got into difficulty 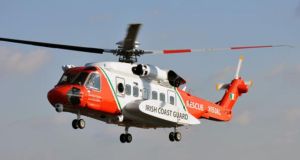 The Shannon based search and rescue helicopter was involved in the search operation.

Around 35 people have been rescued from Lough Derg after an international rowing event encountered a severe change in weather conditions.

The Coast Guard responded to an emergency call at 5.30pm this evening when it emerged that a number of the 18 boats involved had encountered difficulties.

One vessel was initially thought to be missing but a spokeswoman said that by 9.30pm it was believed all of the participants were safe.

The Coastguard said that while the exact cause of the problems was unclear, it was believed that conditions on the water changed quickly imposing force six winds and a two foot swell.

The Valentia station were contacted by a member of the public at 5.30pm and immediately scrambled the Shannon based helicopter and the Lough Derg and Killaloe lifeboats.

Gardaí and the ambulance service were alerted while units of the fire brigade from Killaloe and Scarriff were mobilised.

The international event, which featured recreational participants, began this morning and was due to conclude in Killaloe.