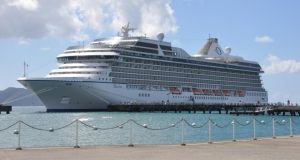 A rescue mission which would have been the longest ever by an Irish Coastguard helicopter to pick up an ill passenger on the MS Marina off the Co Cork coast has been cancelled.

A rescue mission which would have been the longest ever by an Irish Coastguard helicopter to pick up an ill passenger off the Co Cork coast has been cancelled.

The 79 year old man took ill when he suffered a suspected stroke on board the cruise ship, MS Marina some 550km off the Cork coast late last night.

The captain of the cruise ship requested an immediate medevac of the passenger and the Irish Coastguard responded by tasking its Shannon based helicopter, Rescue 115.

The helicopter proceeded to the Erik Raude oil exploration rig 160km off the Cork coast where it intended to refuel before continuing to rendezvous with the cruise ship.

However Rescue 115 experienced a technical difficulty and a second Irish Coastguard helicopter based at Waterford, Rescue 117 was tasked to assist in the operation.

Rescue 117 brought two engineers to the rig to try and solve the problem with Rescue 115 and in the event of not being able to do so, to continue itself to the cruise ship.

However the evacuation operation was stood down at around 5pm after the captain of the MS Marina confirmed that the patient had been stabilised on board the ship.

The patient had received treatment from the ship’s doctor but a second doctor from among the passengers had also come forward to assist in stabilising the patient.

The MS Marina will now proceed to Cobh at full speed and is due to arrive in port at 8am tomorrow when the patient will be brought to Cork University Hospital for treatment.

Dogged Armagh fail to stop Dublin claiming place in final 06:00
‘It wasn’t down to anything dramatic I said . . . It was down to the players’ 06:00
Waterford get up off the floor to turn the tables on Kilkenny 06:00
Insurance reform group welcomes court ruling in personal injury case 05:29
Hospitality sector may take four years to recover, Supermac’s claims 05:27