Londoner Charlie Connelly to shine at writing festival whatever the weather 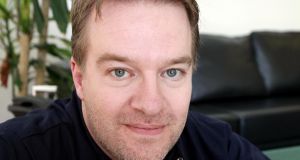 Literary festivals and fine weather can be something of a lottery in Ireland but one man well poised to cope with the vagaries of the Irish summer is Charlie Connelly who appears at the Immrama Festival of Travel Writing in Lismore Co Waterford this week.

Connelly’s most recent work Bring Me Sunshine deals with the perennial conversation topic of weather and he will speak about his latest offering at the Literary Breakfast on June 16th when he will also read from his other works.

A Londoner claiming Irish roots, Connelly has won plaudits for the eclectic nature of his writing - from Attention All Shipping where he visited places mentioned in the BBC shipping forecast to Our Man in Hibernia: Ireland, the Irish and Me.

He also wrote In Search of Elvis, in which he established that when Elvis Presley died in 1977 there were 185 Elvis impersonators but thanks to exponential increases, one on four people in the world will be an Elvis impersonator by 2050!

“I’ve long hankered after an invitation to Immrama as to my mind it is the premier event on the travel writing calendar. I’m as honoured as I am delighted to be appearing this year as part of such a varied and prestigious line-up,” he said.

“I’ll be talking through some of the more humorous stories from my literary travels around the shipping forecast map, my journey around the globe chasing the spiritual legacy of Elvis Presley and my walks recreating some of the great journeys from British and Irish history.”