Judges’ take-home pay down a third since 2009 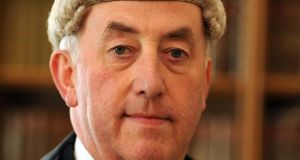 The tense public standoff between judges and politicians over judicial pay and conditions may have abated, but the issue remains deeply sensitive and has left significant tensions within the higher echelons of the judiciary.

According to figures supplied by the Department of Public Expenditure and Reform, the Chief Justice earns €251,562, although on taking up the role in 2011, Susan Denham announced she would not be taking the increase in salary that goes with the position.

Calculations
Pension and lump-sum benefits for judges are calculated by reference to total reckonable service and salary on the last day of service. In the case of Supreme Court judges, pension comprises 1/40th of salary for each of the first five years’ service and 3/80ths of salary for each subsequent year of service – subject in all cases to a maximum of half times salary.

The department says this accrual rate is almost twice as fast as for public servants.

However, the Association of Judges of Ireland says take-home pay for serving judges has fallen by a third since 2009 and up to 45 per cent for new judges. It has expressed “grave concerns” about pension terms for incoming judges, who – under the Public Service Pensions (Single Scheme and Other Provisions) Act 2012 – will have to serve 20 years instead of 15 before they can draw a full pension.

Future appointees must also pay a 13 per cent contribution towards their pension, instead of 4 per cent by serving judges.

Considerable debate
Over the course of the dispute with Government, the Supreme Court judges have largely made a point of remaining above the fray. But behind the scenes the issue has stirred considerable debate. The main conduits of information from the judges’ association have been Adrian Hardiman and Donal O’Donnell, who sit on the group’s executive committee.

When Judge Peter Kelly of the High Court came in for public criticism after private remarks he made about the Government eroding judicial independence became public, Hardiman gave a strongly-worded defence of Kelly’s position. “The notion that judicial appointments should continue to be entirely political while there is a zero protection, from a financial point of view, for the judges, against the executive, is one not consistent with the maintenance of an independent judiciary as it’s understood in the common law world,” Hardiman said in April.

1 Brazilian father to be deported days after daughter’s birthday
2 The Boris bridge: Will Johnson’s ‘vanity project’ ever happen?
3 Coronavirus: Four cruise ship evacuees test positive in England
4 Co Clare houses surrounded by water evacuated as rainfall warning issued for most counties
5 ‘The IRA has gone and they are not coming back. That’s the reality’
Real news has value SUBSCRIBE

England 24 Ireland 12: How the Irish players rated at Twickenham 19:04
Leitrim’s hopes of survival suffer at the hands of Offaly 19:03
Ryanair and Aer Lingus monitor impact of conronavirus on travel to Italy 18:07
Iran’s hardliners head for sweeping victory as voters stay away 18:05
Roscommon keep up their bid for return to the top flight 17:59