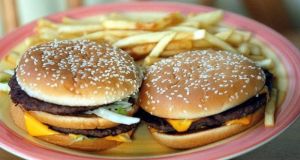 An Irish meat processing company found horse protein in beef consignments from Poland last June but did not inform the authorities, Minister for Agriculture Simon Coveney has told the Dáil.

He said the QK Meats had sourced supplies from 19 different Polish suppliers over a sustained period and stored the meat in QK Cold Stores, Nass. Based on its own risk assessment, it tested 15 consignments from 9 of the suppliers and found seven tested positive for equine DNA.

The first positive result was on June 27th, 2012. The horse meat scandal erupted after the Food Safety Authority first detected equine DNA in meat samples in January of this year.

Mr Coveney said that in June QK Meats contacted its Polish supplier and it arranged to take back the consignment. Further positive results were found in October, November, December 2012 and January 2013. Some of these consignments were sent back to the Polish supplier.

The company told the department that none of the material entered the food chain but it continued to use Polish material. The company was buying the meat at €400 per tonne less than the corresponding price for Irish meat.

Other ingredients that were not tested were allowed enter the food chain. A range of customers in six countries were given frozen minced meat products that contained between ten per cent and 40 per cent Polish product.

The company did not explain why it tested for equine DNA in the first place, he said. The minister described the findings as “extremely distrubing”.

Since the January announcement by the Department of Agriculture, Birds Eye has named QK Meats as a source of horse meat contamination in three of its products.

The department has also discovered that material containing horse DNA was supplied by QK Meats in January 2012, to Dawn Fresh Foods in Fethard, Co Tipperary. This material ended up in Oak Farm Cottage Pie, a product supplied to 47 schools in the UK. The material supplied by QK Meats came from its Polish suppliers.