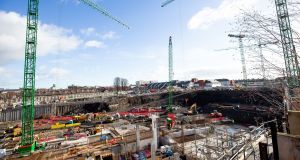 A view of the construction site of the national children’s hospital near St James’s Hospital in Dublin. Photograph: Tom Honan

Construction work has yet to resume on the €1.7 billion national children’s hospital, seven weeks after coronavirus restrictions on building were lifted, because of a dispute between the main contractor and the board of the hospital.

The stand-off relates “primarily to the cost implications of the closure and reopening of the site and who should bear them”, the hospital board has said.

The board admitted there would be further delays to the completion of the hospital but added it was “too early to fully assess the time or cost impact of the pandemic”.

No work has been done on site since March 31st when construction work across the State came to a halt as part of measures to contain the spread of Covid-19. This industry-wide restriction was lifted on May 18th but almost two months later work has yet to resume at the hospital site.

A previous stoppage on site was estimated to have added €10 million a month to the construction costs of the hospital, indicating that the current delay may already have cost the taxpayer an extra €30 million with no resolution in site.

The National Paediatric Hospital Development Board (NPHDB) said contractors Bam Ireland should return to the site “without delay” and the matter should be put to the dispute management process in the meantime which, the board said, was agreed when the contracts were signed.

The stand-off between the board and the developer is the latest setback for the hospital which was over budget and behind schedule even before the Covid-19 crisis.

The board said it was clear “on its expectation that the main contractor meets its obligation by returning to the site without further delay”.

The hospital is scheduled to be finished by the end of December 2022 with the handover to the State in early 2023.

Covid-19 and further delays in opening are putting those dates in doubt. The board said the contractor had not made up for time lost even before Covid-19.

“The NPHDB is continuing to engage with the contractor to obtain an updated programme of works that is in line with its contractual commitments,” it said.

“There will be delays associated with the requirement to cease works on the site due to Covid-19 restrictions and following reopening in respecting social distancing, however it is too early to fully assess the time or cost impact of the pandemic.

“Since the commencement of the easing of restrictions on May 18th, the NPHDB has been engaging with Bam, the main contractor at the new children’s hospital, to ensure the earliest possible reopening of the site.

“Some matters still remain unresolved at this time, relating primarily to the cost implications of the closure and reopening of the site and who should bear them.”

The board, contractors and the design team are continuing to work remotely on all non-site-based construction elements of the project in the interim, in line with Government guidance.

It concluded: “All those involved in the design and build of the new children’s hospital are acutely aware of how urgent it is to complete the hospital as soon as possible within the budget allowed and is committed to doing so as quickly as possible on behalf of children, young people and their families.”

Bam Ireland is believed to have concerns about the relatively tight nature of the site and its location beside St James’s Hospital which has been one of the main hospitals dealing with the pandemic in the State.

It has told the board that it is not an ordinary construction site and there are costs involved in social distancing which need to be met.

Bam Ireland said it had no comment about its dispute with the board of the hospital.