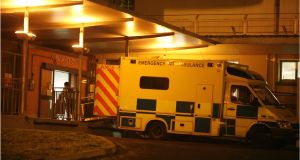 A woman in her 60s was killed and a man critically injured in a road crash near Roscrea, Co Tipperary.

The man and woman, from Tallaght, west Dublin, were travelling in a car which was involved in a head-on collision with a van around 3 pm.

The N7 “old Limerick road” remains closed in both directions between Roscrea and Dunkerrin following the collision.

The woman was the driver of the car. Two passengers, a man in his 70s and a man in his 50s, were airlifted to University Hospital Limerick with serious injuries.

One was said to be in a critical condition, the other in a serious but stable condition.

The driver of the van was not injured, gardaí said.

The Shannon-based Coast Guard Rescue helicopter and the Athlone-based Air Corps Emergency Aeromedical Service helicopter were involved in the operation.

Ambulance crews from Nenagh, Birr, and Portloaise attended the scene.

Gardaí in Tipperary are investigating the incident. A forensic examination of the crash site is underway.