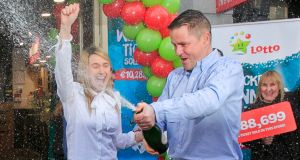 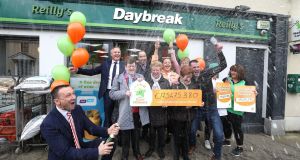 The winner of Saturday night’s €10.2 million Lotto jackpot draw has come forward to claim the prize.

The National Lottery confirmed that the winner of the €10,288,699 Lotto jackpot had been in touch shortly before 3pm on Monday and arrangements were being made for the ticket owner to collect the prize in the coming days.

A spokesman for the Lotto said the winner had lodged their ticket with the National Lotto for safe keeping, will seek “independent legal and financial advice, and will make their prize claim in due course”.

It is understood the Rogers family and National Lottery are organising a cheque collection event for later this week, although no details have yet been released.

National Lottery chief executive Dermot Griffin said the national jackpot had been rolling since before Christmas.

“This has been an extraordinary few days in the 32-year life of the National Lottery,” he said. “We had our highest ever jackpot prize win with a family syndicate winning an incredible €175 million on EuroMillions last Wednesday. Now, just days later, we have a lucky Lotto player who has won this amazing €10.2 million Lotto jackpot prize.”

The winning National Lottery ticket was sold in Spar at 63-65 O’Connell Street in Dublin city centre.

Store owner Barry Thompson said he could not believe it when he received word from the Lotto on Monday morning that his shop had sold the winning ticket.

Mr Thompson, who took over the store in 2008, said this weekend’s jackpot was the “biggest win we have had”.

“I had heard on the news that there had been a €10.2 million Lotto winner from Saturday but had no idea it had been sold in my store. There is a great buzz here in the shop. I employ around 15 staff and the sense of excitement here today is unreal.”

The shop will receive a €15,000 prize as the seller of the winning ticket.

Some 21 players have won jackpots exceeding €10 million since the Lotto was launched in 1988.

The EuroMillions jackpot of €175 million is the largest amount of money to be handed by the Lotto since Dolores McNamara’s win of €115 million in 2005.

Money from eight other European countries is being transferred to Dublin this week in order for the National Lottery to be able to pass it on to the nine Rogers siblings.

The family is understood to be trying to remain grounded having been the source of intense interest locally and from media in recent days.

Two of the syndicate sisters Kathleen Sheridan and Christine Rogers had confirmed the win as they enjoyed a celebratory lunch at the Bracken Court hotel in Balbriggan last week.

The family have said the win was “a lot to take in”, but were said to be hoping the level of interest in the prize would die down in coming weeks.