Outlook is for sunshine, blustery wind, some showers but rain mostly confined to nights 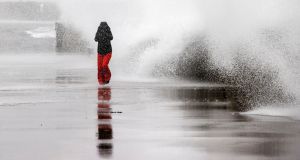 A yellow level wind warning has been issued for counties Donegal, Galway and Mayo.

The alert will be in place from 9pm on Monday until 8am on Tuesday with gusts expected to reach between 90km/h and 110km/h.

Met Éireann said where winds were onshore there was a risk of coastal flooding around high tide.

However, the worst of the recent weather appears to be over with temperatures over coming days set to reach a comparatively balmy 11 degrees, in prolonged sunny spells. While scattered showers may be expected, any heavy rainfall is expected to be confined to night time.

Strong winds will not be far away however as the country sits on the edge of a strong low pressure over the Atlantic, with satellite areas of low pressure affecting counties Donegal, Sligo, Mayo and Galway.

Overall, the winds will come from a southwesterly direction bringing milder weather than that experienced over the weekend, providing good conditions for walking in local parks and within the 5km limit.

The forecaster says Tuesday will begin with a mixture of cloud and bright spells with scattered blustery showers. Some of the showers will be heavy with a slight risk of hail and isolated thunderstorms. Winds will be moderate to fresh and gusty at first, and will ease through the morning with the showers becoming lighter and more isolated later in the afternoon. Highest temperatures of 8 to 11 degrees. Cloud will increase from the southwest during the evening ahead of rain pushing in, along with freshening southerly winds.

Wednesday will be a similarly, blustery day with sunny spells and scattered showers but there will be something of a “blip”on Wednesday night with falling temperatures, some rain and sleet in the northwest and even the possibility of snow returning on higher ground. Lowest temperatures of 0 to 3 degrees.

A low pressure system is indicated to move up from the south on Wednesday night bringing widespread rain with a risk of flooding in places along with some strong winds. There is the possibility of some sleet and snow falls too.

Thursday will begin with a wet and windy start with rain across much of the country. It will be heavy in places but clearing in the northeast during the morning and becoming largely dry for the afternoon. Highest temperatures will reach 9 degrees. It will becoming very windy overnight as rain extends to all areas with some wintry falls possible in the north and west. Lowest temperatures of 1 to 6 degrees.

Friday will be a mild, wet and windy day with rain in all areas, clearing to showers. Highest temperatures of 10 to 13 degrees with fresh to strong and gusty southerly winds moderate. Further rain will push up from the south, extending northwards through the night as winds strengthen again on southern and eastern coasts. Lowest temperatures of 5 to 8 degrees.

Current indications suggest the weekend will continue very mild with daytime highs in the mid-teens. Widespread rain will fall on Saturday but it will become drier on Sunday away from Atlantic coasts.