What’s on: Something for the weekend

Women in the media conference, rugby, a food festival and Dodder spring clean 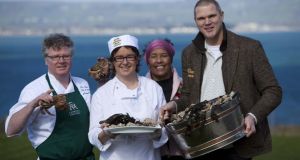 Food lovers are in for a treat at the West Waterford Festival of Food in Dungarvan this weekend. Photograph: Dylan Vaughan

Connacht travel to Ravenshill tonight with high hopes of their first victory in Belfast since 1960. Ulster have injury worries but will be looking to bounce back after the heartache of last weekend’s European exit to Saracens.

Jared Payne is suspended for tonight’s fixture after his controversial sending off against Saracens. Darren Cave and Stephen Ferris are rested but Andrew Trimble’s speedy recovery from a head injury is a boost for Ulster. Connacht are unchanged for the fourth successive match, with Robbie Henshaw starting at full-back.

Kick Off is at 7.05pm, Ravenshill. A limited number of tickets are available through ulsterrugby.com

Ballybunion will this weekend host a conference to celebrate the successes of women in the media with a series of events and guest speakers.

Among the guest speakers are former Irish Times editor Geraldine Kennedy and RTE’s Miriam O’Callaghan. The conference will also mark the life achievements of the late author Maeve Binchy and Irish Times journalist Mary Cummins, who both had links to Ballybunion.

The West Waterford Festival of Food continues this weekend in Dungarvan. The festival offers fine dining and casual bistro experiences - all while supporting local producers, restaurants and retailers.

There are over 80 events taking place including demonstrations, cooking classes and dining experiences. There is plenty on offer for children, with activities such as Easter egg decoration and kitchen sink science. westwaterfordfestivaloffood.com

This is the Galway festival’s fifth birthday, and a string of gigs, concerts and music workshops will be taking place around the town.

Learning workshops, priced at €10, take place at Clifden Community School and are offer for people of all ages and abilities, as well as pub music sessions with both local and visiting artists. clifdentradfest.com

A convoy of pink cyclists will parade around Dublin tomorrow to promote the Giro D’Italia coming to the capital on May 11th.

The cyclists will be handing out pink merchandise including Giro water bottles, keyrings, and badges to passers by before crossing a makeshift finish line at Merrion Square West bike station.

The event begins at 11am and finishes at 2pm, and Dubliners are encouraged to head to one of five main locations to watch: Barnado’s Square, Stephen’s Green, Jervis, Merrion Square and Earlsfort Terrace. discoverireland.ie

Over 300 volunteers have already signed up to take part in the second attempt to clean the River Dodder from source to sea tomorrow.

Derry and Mayo are first up in Sunday’s double header at Croke Park. The two sides met in Castlebar last Sunday where Mayo ran out comfortable 2-12 1-7 victors against a second-string Derry side. Derry had already qualified for the final, and manager Brian McIver has made 13 changes for Sunday’s clash. Kick off is at 2pm.

Dublin play Cork in the second semi-final. An injury time point from Diarmuid Connolly saw Dublin squeeze through to the final at the expense of Tyrone last weekend, while a scintillating second half display saw Cork beat Kerry 2-18 to 2-11. The Rebels have made two changes to their starting lineup on Sunday, with Donncha O’Connor and Daniel Goulding coming in as they bid to make their fourth final in five years. Kick off is at 4pm.

Tickets for both games can be purchased through gaa.tickets.ie

The weekend gets off to a dry start. Rain is forecast is the West, but Connacht fans travelling North for tonight’s fixture against Ulster should avoid it.

Tomorrow will bring showers early on, but sunny spells should appear later with the temperature creeping up to 15 degrees.

Sunday promises to be the pick of the weekend, and should be mostly dry and bright, so those heading to Croke Park for the GAA semi-finals can leave their raincoats at home.